By Jay Floyd September 08, 2012
"Fear the 'Hawk" is the motto of Reading Phillies closer Justin Friend, who sports a hairstyle that has made him stand out in the past. With the sides of his head cropped closely and the center section of his head, from front to back, left longer and shaggy, the Double-A closer has some new mohawk-mates on his team.

Outfielders Tyson Gillies (pictured on the left) and Leandro Castro (on the right) currently rock similar 'do's, with Gillies' version matching Friend's a bit and Castro's shaved to the skin on the sides being more reflective of Mr. T's famed cranium. 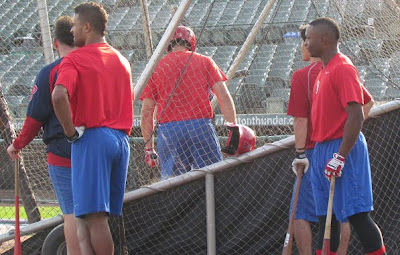 A survey of teammates which included Tommy Joseph, Jiwan James, D'Arby Myers, Darin Ruf, Cody Asche and Miguel Abreu on Friday, regarding who had the better mohawk, was fairly balanced.

Friend, of course, is recognized by teammates as the father of the trend. The 26-year-old, who was acquired by the Phillies in the 2010 Rule 5 draft, was dominant for Reading this year, as he is perfect in 25 save opportunities while allowing just one earned run through 39 outings, including the postseason.

With an even amount of votes for each contender to the title of "Top Friend Inspired Hairdo on the Team", the All-Star reliever cast the deciding vote in the survey. Citing the similarity to his own style, Friend picked Gillies.

In hindsight, polling the team may have been a waste, as Friend's vote is quite possibly the only one that should count.

Jay Floyd said…
Not sure that would go over well, but perhaps with consequences, Leandro could have upped his hair game.
September 8, 2012 at 6:12 PM