PN Round Table: What should the Phils do with Ruf? 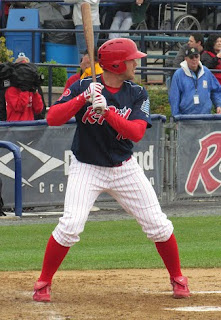 First baseman/outfielder Darin Ruf has had a tremendous season for the Double-A Reading Phillies. After setting a team single season record with 38 home runs, getting named Eastern League Most Valuable Player and being honored as the Phillies top offensive minor leaguer with the Paul Owens Award, Ruf could be on the verge of a September call up once the R-Phils have completed their possible postseason run.

This week, one of my other internet homes PhilliesNation.com asked its writers to offer their thoughts on what the big league Phils should do with the 26-year-old Ruf. Listed below is what I had to say on this matter. Click this link to read the full post featuring comments from PN's Eric Seidman, Ian Riccaboni and Ryan Dinger.

At the risk of duplicating my sentiments from this week’s edition of Phillies Nation TV, it would be a complete disservice to Darin Ruf if the Phillies don’t promote him to the big league roster once Reading’s season is done. Ruf’s August (.371 avg, 20 HR, 36 RBI in 31 games) is legendary. It’s as simple as that. The man has more than earned the right to, at the very least, fill a Mike Cervenak or an Andy Tracy type role, as a guy that can pinch hit or give a teammate a day off in the field.

Giving Ruf six to ten games in the field and another six to ten pinch hit at bats would be the right sampling to allow the 26-year-old slugger to show what he can do in the big leagues for a team that should have some roster openings next spring.