By Jay Floyd September 05, 2012
A trio of Reading Phillies launched solo home runs to power the club to a 4-2 victory in the opening game of the best-of-five Eastern League division series at FirstEnergy Stadium on Wednesday night.

Trenton kicked off the scoring in the top of the 4th, when Reading starter Austin Hyatt allowed a two-run homer to left fielder Ramon Flores, who was promoted to Trenton this week after spending the season with Class A Advanced Tampa.

Reading clapped back in the 5th inning when a lead-off homer by minor league veteran Jake Fox and a run scoring ground out by Jiwan James knotted the game at two runs apiece.

The right-handed Hyatt, the Phillies' 15th round draft choice in 2009, went 6 2/3 innings and allowed just those two earned runs, while striking out four and walking two in the process. 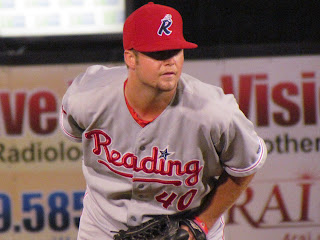 After Hyatt walked two batters in the 7th, righty reliever Tyler Knigge (pictured) took over, quickly inducing a double play grounder from Thunder first baseman Kevin Mahoney. The 23-year-old, who was the Phils' 12th round draft pick in 2010, also pitched a scoreless 8th, despite surrendering two singles, and was in line for the win.

Catcher Tommy Joseph, acquired by the Phillies from San Francisco in the Hunter Pence trade, slammed a lead-off home run in the bottom of the 7th inning off of Thunder ace Brandon Marshall. That blast was immediately followed with another round tripper by right fielder Leandro Castro.

Justin Friend, the R-Phils' righty bullpen stud would come on to pitch the 9th, staying perfect in 25 save opportunities at the Double-A level this year. The 26-year-old Friend was a minor league Rule 5 draft pick out of the Oakland organization back in 2010.

Although they were named as co-champions of the EL in 2001 when the finals were cancelled, following the terrorist attacks on our nation, the R-Phils have not won a league championship since 1995.