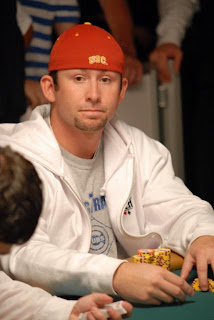 NCAA baseball provides many youth throughout our nation the chance to extend their baseball careers while earning a college degree.  Often, many of these players go on to live successful lives outside of the sports world.  A select few are fortunate enough to make it into minor league baseball and fewer still go on to play in the Major Leagues.  Jason Newburger, formerly of the Bradley University Braves, did something even rarer after his college career and turned his competitive spirit into a successful professional poker career

Jason Newburger was destined for a college sports career in high school after lettering in three sports.  He was also an all-state quarterback for his football team and even led them to the Illinois state playoffs in 2001.  However, it was baseball where he truly excelled.  In his senior year, Newburger hit an amazing .515 with eight homers and 45 RBI to become the Daily Herald Athlete of the Year.

Newburger transferred to Bradley University in 2003 from the University of Iowa and began a four year career that saw him play three of those as a reserve utility fielder.  His final year, Newburger played third base and won the Jewish Sports Review All-American award at the position as well as the A.J. Robertson Award for Most Valuable Player on the team.

In 2005, Newburger began to take up professional poker and by the time he completed his career with the Bradley Braves, he was playing the game for a living.  He saw success quickly as he made the final table of event in both 2006 and 2007 at the World Series of Poker.  In 2007, he finished 2nd in an event and took home an impressive $165,707.

Newburger has one pro poker title to his claim as he won a WSOP Circuit title in 2009 in the game of Pot-Limit Omaha.  So far in his poker career, Newburger has an impressive 16 WSOP cashes as well as just over $441,000 in prize money earned.  Outside of poker, Newburger is still very active in baseball and has even served as a student coach for the Bradley Braves.  He also plays golf in his spare time.

It is rare that you see Division 1 athletes switch career paths the way that Newburger chose to with poker.  Much like baseball, the game of poker requires a lot of dedication and focus.  It's not surprising that someone like Newburger chose poker to channel his energies after his baseball career.  So far, it has proven to be a smart decision and only time will tell just how far this multi-talented athlete will excel in the game.

Lifelink said…
Hi! This is my first visit to your blog! We are a team of volunteers and new initiatives in the same niche. Blog gave us useful information to work. You have done an amazing job! poker online terpercaya
January 11, 2021 at 9:03 AM