By Jay Floyd September 14, 2012
Following the Reading Phillies' loss in the Eastern League playoffs earlier this week, I spoke with the team's coaching staff about their successful season and some of the team's top performers. Quotes from pitching coach Bob Milacki and hitting coach Frank Cacciatore lie ahead... 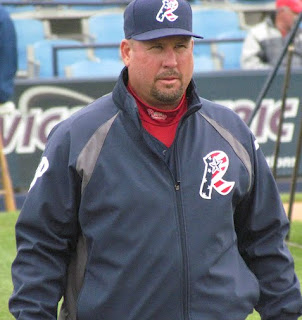 Milacki on the season, as a whole, for various members of the R-Phils' pitching staff-

Trevor May, who started out like gangbusters and then had his ups and downs, finished strong. I thought he really finished strong and (Adam) Morgan pitched outstanding since he was here. And our trade with the Dodgers, getting (Ethan) Martin, Martin was outstanding almost every start out, except one when he was a little under the weather, but you couldn't ask for more out of him.

Through the whole year, with all the guys that came up and the guys that left here, there's a lot of promise going through the organization. The arms that we have and the talent that we have, from (Tyler) Knigge and Morgan and May, Martin on down the line. And (Jonathan) Pettibone up at Triple-A and (Tyler) Cloyd's up in the big leagues. I mean, you couldn't ask for more than the progress these guys made and it was just a fun year. 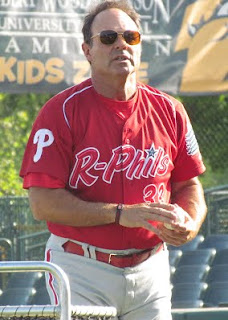 Cacciatore spoke of his club's offense-

I can't say enough about what we did. With (Darin) Ruf's year was just tremendous, especially the month of August. From the get-go, all the guys that started here, the way they went about their work...I think a lot of it had to do with their dedication and their work ethic and the way they came to work every day and the way they maintained their swings. There were guys that we sent up...sending up (Sebastian) Valle and Cesar Hernandez and then the guys we had take their places came in and got their opportunities and they made the most of it. You know, I'm pleased as punch. I just hoped a couple of those balls hit hard (in this series) might have fallen, but we had a great year.


Also, I asked coach Frank about the season that 22-year-old third baseman Cody Asche had in his first full year as a pro, after being drafted in the 4th round by the Phillies last year out of University of Nebraska. Asche batted .324 with 12 HR and 72 RBI in 130 regular season games this year, combined at Class A Advanced Clearwater and Reading.-

I had the opportunity to be with (Asche) last year in instructional league after he had a tough season, coming into pro ball. He had to make some big adjustments and he got together with (Phillies minor league hitting coordinator) Steve Henderson in instructional league and I was there to see what they were doing. It was very impressive to see a guy like that pick up on things so quickly and I think that's going to carry him a long ways because he's a pretty smart kid, he's pretty intelligent and he likes the game, first of all, and he likes to hit, but he knows what to do and is able to make adjustments. So, all those put together with his natural talents, I think he's going to be pretty successful and gosh, he's shown it, as he's caught fire in the past month and a half of the season. He really helped us down the stretch, so I see nothing but good upside on him and it's going to be fun to watch him continue to develop next year and get even better.