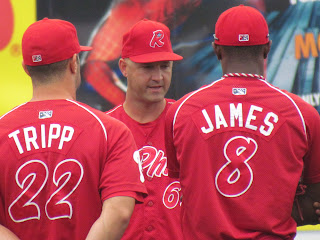 With Thursday's 1-0 loss at Trenton, Reading has been shut out for three consecutive games. It is the first such streak since April, 2005.

In addition, the R-Phils are just 3-12 in July, after ending June 1.5 games up in first place in the Double-A Eastern League's Eastern division.

On the club's offensive struggles of late, manager Dusty Wathan (pictured) had the following to say:

"I think (the struggles) would have been (of great concern) if we hadn't seen some adjustments made. I think (Thursday's) ball game, we did a nice job with our bats all the way from top to bottom, for the most part. We gave ourselves some chances to score some runs. It was just one of those things in baseball where you can't get the big hit. I think if you had talked to me a week ago, I would have been a little bit frustrated with the way our approach is at the plate. But, I think we've made some nice adjustments and I think it'll come, with patience. I think we're trying to be a little bit too aggressive. We're going after things instead of letting the game come to us. I think the last couple of days has been better."


Recently, two Reading relievers underwent surgery. Righty starter David Buchanan had season ending surgery to repair a tendon in the middle finger in his pitching hand. In addition, right-handed releiver Lisalverto Bonilla had surgery to repair the thumb in his pitching hand, which he injured horsing around at the team hotel in Kansas City, while he was there for the MLB All-Star Futures Games.

"I wasn't there. I don't really know exactly what happened. There's a lot of speculation, but without being there, I'd hate to do that. He had surgery on it. I believe he had a pin put in it. He's down in Florida right now, rehabbing, and I haven't heard anything as far as a time table for a return."


More quotes from the team-

Mario Hollands on his best Double-A outing to date...7 2/3 innings, 1 run against Trenton on Thursday night:

"The Thunder were really aggressive and I was able to keep my pitch count down, because they were making early contact and my defense was doing really well. And their pitcher (Shaeffer Hall) was doing the same thing I was doing with the early contact. The game went by really fast and unfortunately, we weren't able to squeek out a run."

Hollands on his reaction when he and an opposing pitcher are matching each other, zero-for-zero:

"It kind of gets me going, 'cause I don't want to be the first one to surrender a run or break, I guess. But, it's nice because you always like a fast-paced game. It helps keep a good tempo."


Third base prospect Cody Asche spoke about playing on the road, in Trenton, where the crowd seemed to favor the R-Phils more than the home Thunder on Thursday:

Reliever Colby Shreve, who ended a Thunder threat in the 8th inning with 1/3 scoreless inning on Thursday, on the Philadelphia fans in Trenton:

"I definitely noticed it. I noticed a lot of people that I've seen in Lakewood. I guess Lakewood's not that far away, so that was cool that they came out to support us and to see some of the guys that they've seen the last couple of years. I didn't really realize it (till I pitched) and was headed into the dugout, because down in the bullpen you can't really see it. They were definitely out in force last night."

Reliever Ryan Duke on the heavy Phillies crowd in Trenton:

"It was different because we were down in the bullpen and we ended up turning a double play (early in the game) and the crowd went really loud, or whatever, so that was cool. And then walking outside after the game, I saw some familiar faces from Lakewood trying to gets autographs on my Lakewood cards from this year. So, it was totally awesome to see a bunch of people out here rooting for us."