OF Prospect James is Humble & Focused 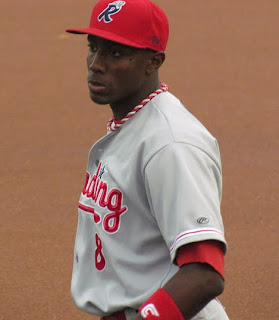 In the Reading Phillies' home game against Bowie (Baltimore affiliate) on Saturday, June 14th, outfielder Jiwan James put forth an effort that resulted in one of the plays of the year. In the 3rd inning, James approached the outfield wall and leaped to rob the Baysox' Jonathan Schoop of a home run. In the process, James' mitt landed behind the wall, while the ball was next seen in James' bare hand, after he fell to the ground on his back. James drew national attention with the remarkable catch (seen here) that displayed great athleticism, determination and luck.

Despite a nagging injury that has hindered his progress at the Double-A level this year, James has proven to be a tough player that can make an impact on any given day.

Originally drafted in the 22nd round of the 2007 draft as a pitcher, James, who was converted to an everyday player in 2009 after dealing with an arm injury, isn't normally a very big fan of the sort of attention that his catch garnered. The switch-hitting outfielder prefers to remain low key and avoid that type of focus, but James admitted the recent spike in interest was at least a bit enjoyable.

"It was fun for a while," James stated. "I tried not to pay too much attention to it. I mean, it's cool to have that, but I'm a pretty humble guy and I don't really talk about myself that much. So, with that, I just let everybody else do the talking and just kind of sit back and watch it."

The catch along with the subsequent attention in the media and on the internet was seemingly the highlight of James’ 2012 campaign, however, as the 23-year-old Florida native has had a sometimes-rocky year. Any critics concerned with James’ offensive production this season, which has seen him post a .251 batting average with 12 doubles, five triples, six HR, 28 RBI and a stolen base total of six- a hefty drop off from the 30+ bags he has swiped in each of the past two seasons- should consider that the 6-foot-4-inch 180-pounder has been playing with an ailing left knee for much of the season.

Over the past three years, including this one, James’ OPS has resided within an eight-point range (.686 in 2010 at Class A Lakewood, .690 in 2011 at Class A Advanced Clearwater, .682 in 2012 with Reading through action on Monday). It is worth noting that despite seemingly stagnant numbers, the Phillies organization, including James’ skipper, is pleased with the youngster’s progress and is aware that a physical hindrance has impacted his statistics.

"Jiwan's done a great job,” said R-Phils manager Dusty Wathan. “He's playing through- he’s got a banged up knee. As far as, something he slides on and keeps flaring up on him, it's just one of those things that he's gonna have to wait till the off-season to fully rest it.”

Wathan also praised James for putting in extra time around the ballpark to work on his game. According to the 38-year-old baseball veteran, James sets an example that other players can learn from.

The son of former Royals manager John Wathan, Dusty described the levels of pride and desire that James has, adding that the Williston High School product isn’t the type of guy that likes to sit out, so the coaching staff has had to take it upon themselves to ensure that James rests his problematic joint regularly.

James, however, isn’t the type to cite health concerns or other reasons when describing his 2012 campaign. The Phillies' 10th ranked prospect, according to PhilliesNation.com’s preseason rankings, centers his owns progress solely in his own hands, expressing a desire to improve but never offering an excuse.

"It's been a lot of ups and downs. It's just about making adjustments from point A to point B. Right now I just gotta be a little bit faster at trying to make those adjustments and basically just keep doing what I'm doing. It's been a roller coaster ride- up, down, up, down. I just gotta figure out how to make my adjustments quicker. "