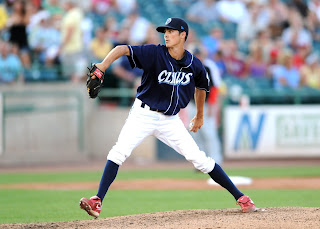 Rivals in college, two Phillies draft picks from this year have paired up as battery mates with the Class A Lakewood BlueClaws. University of Texas product Hoby Milner (pictured, right) and Baylor graduate Josh Ludy regularly faced off, in one of college baseball's top conferences, but now they must rely on one another to advance in the pros.

Milner, the son of former Major League catcher Brian Milner, earned honors as a second team All-Big 12 Conference representative this season, when he posted a 7-4 record with three saves and a 2.64 ERA in 34 games for the Longhorns.

According to Milner, the transition from facing Ludy to taking signs from him has been a welcome one.

"I'm glad he's behind the plate and not at the plate, hitting," Milner said with relief. "I mean, he's a great hitter and he's a good catcher too. He hit a 480-foot home run off of me in the last conference series of the year. The next (time) I faced him, I intentionally walked him and I don't know if I've ever got him out, to be honest. But I'm glad he's hitting for us and not someone else."

The 21-year-old Milner was also battery mates with Class A Advanced Clearwater Threshers catcher Cameron Rupp in college as well, throwing all 32 of his freshman innings to the Phillies' number 24 prospect, according to PhilliesNation’s 2012 rankings, before he was drafted by the organization that the duo now calls home. 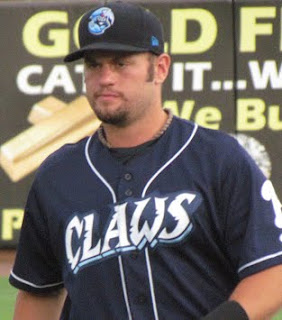 Generously listed at 5-feet-10-inches tall and weighing 210 pounds, Ludy (pictured, left) was the Phillies’ 8th round pick in last month's amateur draft. According to the Portland, Indiana native, it’s been an easy transition going from opponents to teammates, with Milner, in such a quick matter of time.

"The last three years, we've been Big 12 Conference rivals and once we got here, Hoby's a great guy, he's easy to get along with. We're in that group that's just coming from college right now, so we're in the same boat and everything and we've been able to work together pretty well. I got to catch him (in a recent) outing and we've had a pretty good chemistry going on," Ludy expressed.

In addition to jumping into the professional ranks with a former on-field enemy, Ludy is also now teammates with another pitcher he has some history with. Lakewood lefty Blake Mascarello (Purdue) pitched to Ludy on a regional summer league team, during the youngsters’ high school years.

Along with Mascarello, an undrafted free agent signee, Milner and Ludy are among four 2012 Phils draft picks currently making up the BlueClaws roster. Tim Carver (19th round) and Zach Cooper (15th round) are also a couple of new additions in Lakewood.

In six pro games, two of which came with short-season Williamsport, prior to joining Lakewood, Milner has a 2-2 record with a 4.18 ERA. Through 13 games, splitting time between catcher and designated hitter, Ludy has tallied a .304 batting average with 5 doubles, a triple and 7 RBI.

It’s not far fetched to consider that dominance over a pitcher could provide a backstop with the type of insight that might assist that hurler with improving his own efforts versus other offensive opposition. Milner sees evidence of his former nemesis’ assistance already.

"He knows what pitches are easy to hit off me and I guess it worked out that the first time he caught me was my last start and that's been my best start so far, so maybe he's figuring it out for me," Milner stated after Ludy helped his new cohort toss 5 1/3 scoreless frames against the Hickory Crawdads (Rangers affiliate) on July 12th.

It’s certainly a long road from college to the majors, but the quickly bonded Milner and Ludy are already looking forward to potentially climbing the developmental ladder together, as they ascend toward every minor leaguer’s dream.