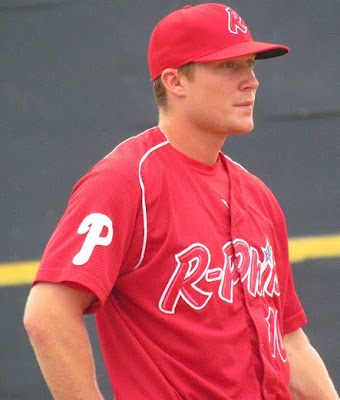 Phillies third base prospect Cody Asche is having a noteworthy campaign is his first full pro season. A 4th round draft pick in 2011 out of the University of Nebraska, Asche has certainly become a fast rising player in the Phils' system.

The lefty hitting Asche made his pro debut last year as a member of the short-season Williamsport Crosscutter, posting a .192 average with 2 HR and 19 RBI in 68 games while manning second base. This year, the 6-foot-1-inch 180-pounder skipped a level and began the season at Class-A Advanced Clearwater, where he batted .349 with 13 doubles, three triples, two home runs and 25 RBI en route to being named a Florida State League All-Star. In addition, Asche's excellent efforts earned him a promotion to Double-A Reading, where his offensive output (.200 avg, 3 HR, 14 RBI in 27 games) has taken a bit of a dip.

Recently, I spoke with Cody about his progress, his coaches, playing in front of Phillies fans and more. Check out the media player below to listen to the full interview.