By Jay Floyd October 06, 2011
The following is a guest post by the host of 97.3 ESPN's Weekend Sports Guide, Tyrone Johnson. A member of the local media for several years, Tyrone is still a fan at heart. The Weekend Sports Guide airs on Atlantic City's 97.3 each Saturday from 12-3pm. Tune in this Saturday, 10/8, around 2:30 as Tyrone and PhoulBallz.com's Jay Floyd chat about the Phillies postseason. 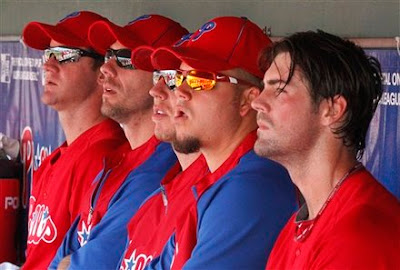 I am frustrated with my fellow fans. All season long, all I heard was the Phillies were going to win the World Series because they have “4 Aces”. As we get ready for Game 5 of the National League Division Series, all I see and hear is Philadelphia fans complaining about...the lineup!

The Cardinals have scored 6 runs, 5 runs, 2 runs and 5 runs, respectively in games 1 through 4, so far in this series. If you told me that before the series began I would have said the Phillies lose in 4 games. This team is not built like the World Championship club from 2008. The current club is built to score a bit, get great pitching, and win 3-2. As much as fans want the Phillies to score double digit runs, that is NOT what this team does.

The focus can't be all about the pitching staff throughout the entire season but then turn into blame on the lineup once the staff falls short. Baseball is a game of failure. Batters are going to have good games and bad games, but great pitching should always win the day. Hopefully, for our sake, Halladay lives up to the billing of "best pitcher in the world" in game 5 of the NLDS.

Anonymous said…
There are many possibilities and instruments for firms in the market who are keen to make sacrifices to create success for you.
October 7, 2011 at 3:52 AM