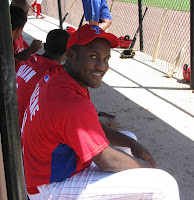 Sources have confirmed that Phillies 2011 1st round draft pick Larry Greene Jr. has been shut down for the remainder of the Florida Instructional League. Greene, who suffered a groin injury at the outset of instructs in Clearwater, has been sidelined for the full extent of the month-long exhibition season. Despite feeling considerable improvement in the area, Greene will be kept out of action by the Phillies.

Greene, a power hitting outfielder selected out of Berrion County High School in Georgia, is expected to make his official in-game debut as a member of the Phillies organization next spring.

In other news, outfield prospect Kyrell Hudson has been hitting the ball extremely well at instructs. The Phillies' 3rd round draft pick from 2009 posted a .171 batting average in 59 games over his first two seasons as a pro, but made great improvements in 2011, hitting .275 in 68 games with the short season Williamsport Crosscutters.

The 6-foot-1-inch Hudson is participating in the Florida Instructional League for the third straight year.

If the righty hitting Hudson, who turns 21 years old in December, continues to shine, he should be a lock to begin the 2012 season as a member of the Class A Lakewood BlueClaws' outfield.

dom d said…
Not a bad thing shutting down Greene. While getting the debut out of the way at instrux could be good for him, I don't think it's crucial to his development.