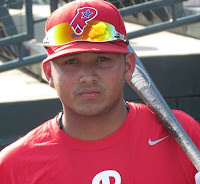 Phillies shortstop prospect Freddy Galvis returned to action on with the Aguilas del Zulia on Wednesday, going 0-for-3 with a walk. The 21-year-old had missed nine days of action with a right wrist ailment that required fluid to be drained from a cyst.

Overall in 5 games in the Venezuelan Winter League, the switch-hitting Galvis, has gone 3-for-14 (.214 avg) with no extra base hits.

Combined at Double-A Reading and Triple-A Lehigh Valley during the 2011 regular season, Galvis posted a .278 batting average with 8 HR and 43 RBI.

The Venezuela native, who is strong in the field, stands a good chance of reaching the big leagues next season.

Infielder Carlos Rivero, who was claimed by the Phillies last off-season from Cleveland, hasn't had much success in the early going. The 23-year-old has gone just 1-for-16 through 5 games with the Leones del Caracas in Venezuela. His lone hit was a homerun. Another Venezuela born player, Rivero had a strong season (.270/.326/.440) combined with Reading and Lehigh Valley.

Ervis Manzanillo has made one scoreless relief appearance for the Navegantes del Magallanes in Venezuela. During the 2011 regular season, the 20-year-old Manzanillo had some ups and downs with the Class A Lakewood BlueClaws, posting an 8-7 record with a 5.02 ERA with a .257 batting average against in 26 games (25 starts).

Veteran left-handed pitcher Les Walrond has appeared in 2 games with the Tiburones de La Guaira in Venezuela. In 2 starts, Walrond, who will soon turn 35, has a 1.43 ERA with 8 strike outs and 3 walks. The Oklahoma native rocked a 1.80 ERA in 33 combined games with Reading and Lehigh Valley in 2011.

Scott Podsednik, Scott Mathieson and Justin Friend are all assigned to rosters in the Venezuelan Winter League, however none of them have seen game action just yet.

In the Dominican Winter League, lefty hurler Ryan Edell has gone 1-1 with a 3.72 ERA in 2 starts for the Estrellas de Oriente. Edell, 28, sported a 10-6 record with a 3.38 ERA in 29 games with Reading and Lehigh Valley this past regular season.

Outfielder Rich Thompson, who was a key contributor throughout the 2011 season with the Triple-A Lehigh Valley IronPigs, has a .211 batting average and 7 stolen bases through 5 games played with the Estrellas de Oriente in the Dominican league.

Veteran minor league infielder Ozzie Chavez has gone 2-for-4 in 4 games with the Toros del Este in the Dominican league. The 28-year-old Chavez played in 42 combined games for Reading and Lehigh Valley in 2011.

19-year-old pitcher Fabian Cota has posted a 9.82 ERA and a save in 6 relief appearances with the Caneros de los Mochis in the Mexican Winter League. Five of Cota's six outings have been scoreless, so his numbers are greatly effected by one considerably poor effort. In 15 games with the Gulf Coast League Phillies in 2011, the Mexican lefty recorded a 1-0 record with a 3.52 ERA.

Mike Zagurski has appeared in 5 games with the Estrellas of the Dominican league. The lefty has recorded 1 save with a 1.93 ERA in 4 2/3 innings of relief.

Tomas Perez, in 5 games with the Cardenales de Lara, has a .273 average with 3 RBI. The 37-year-old infielder stays active playing in his native Venezuela. Perez played with the Phillies for six seasons.

Chris Roberson has continued his career in fine fashion down in Mexico. The one-time Phillies outfielder posted a .337/.417/.534 line during the 2011 regular season in Mexico. The 32-year-old is now batting .302 with 3 doubles, a triple and a HR in 13 games for first place Mexicali in the Mexican Winter League.