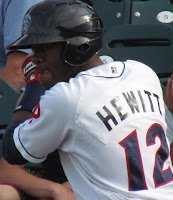 Former top Phillies draft pick Anthony Hewitt took considerable strides this past season with the Class A Lakewood BlueClaws. Selected 24th overall by Philadelphia in 2008, Hewitt struggled throughout his first few years in the developmental ranks.

The Brooklyn, NY native posted a combined .208 batting average at three different levels of his professional career from 2008-2010. However, Hewitt finally broke through and showed significant improvements in 2011, during his second consecutive season with the BlueClaws.

The 22-year-old was named to the South Atlantic League mid-season All-Star team en route to a season that saw him improve his batting average, his power numbers, his speed and his defense. Hewitt's season average of .240 in 2011 was a 32 point jump over his career mark and a 17 point improvement over his previous season high. His 14 homeruns and 55 RBI were both career highs as well. Scouts regularly took notice of Hewitt's range and throwing arm in right field all season long. And most noteworthy of all, Hewitt's base stealing prowess stood out as he was successful in 36 of 41 opportunities (88% success rate).

Last winter, Hewitt arrived in Clearwater in early January to begin his 2011 campaign and was able to work closely with the likes of All-Star first baseman Ryan Howard, who offered plenty of advice to Hewitt, who feels that type of exposure helped him this year.

Hewitt will spend his entire 2011/2012 off-season living in Florida, where he has relocated, near the Phillies spring training facility in order to maximize his workout time.

"I will start swinging the second week in November tweaking a few things and (adjusting) a few other things in my complete game," Hewitt stated. "I live in Florida now, so I can hit with Howard when ever he gets down here and I will be able to use the spring training facilities, as often as I would like, to hit."

While winter leagues are typically an option for many well regarded prospects, or for those with large signing bonuses invested in them, like Hewitt, the 6-foot-1-inch 190-pounder saw enough evidence of progression in his efforts last off-season that he wanted to do the same thing this time around and spend an even lengthier amount of time at the Carpenter Complex after a brief physical intermission.

"So far, since the season has been over, I took about two weeks off. Started working out doing a little weight training and watching lots of hitting video on my self and other hitters in the big leagues, to study them, and learn and apply some things to my game," Hewitt said.

Next year Hewitt will be focused on an assignment with the Class A Advanced Clearwater Threshers, or the Double-A Reading Phillies. If all goes well, he'll continue to advance, and someday be the guy that younger players show up early for spring training to take batting practice side by side with.

OBC said…
Guess you can't talk about Hewitt without mentioning that he strikes out a lot and hasn't lived up to expectations.
October 3, 2011 at 11:35 PM