By Jay Floyd October 17, 2011
In the coming weeks and months we'll be taking a look at several young talents within the organization that could make an impact on the Phillies' big league roster in 2012. With this first edition, we'll review a couple names that could seize an opportunity due to the Achilles tendon injury that Ryan Howard suffered in the final game of the National League Division Series.

It's no secret that three-time All-Star first baseman Ryan Howard is expected to miss the start of next season after undergoing surgery on his ruptured left Achilles tendon this past week. While many fans, media members and baseball analysts expect the Phillies to fill the void, next April, with John Mayberry Jr., who played 18 games at first base in 2011, the team will have other in-house options courtesy of a pair of older prospects. 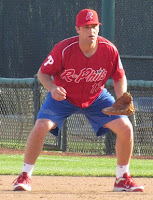 Perhaps the leading option from the minors that could fill in while "The Big Piece" is out of action is 25-year-old Cody Overbeck. The 9th round draft pick from 2008 has been strong on offense in each of the past two seasons, posting a .276 combined average with 48 total homeruns and 154 RBI.

Formerly a third baseman through his first three seasons in the Phillies developmental system, Overbeck dabbled in the outfield and was primarily a first baseman in 2011 with Double-A Reading and Triple-A Lehigh Valley, which clearly increased his versatility.

Overbeck is spending this off-season perfecting his entire game against the tough competition of the Arizona Fall League.

Another potential filler, Matt Rizzotti, who is somewhat of a fan favorite, was seemingly held back this year by the Phillies after the team removed him from their 40-man roster last off-season. Having taken huge strides during the 2010 season, when he posted a combined .360 batting average at Class A Advanced Clearwater and Double-A Reading to earn a promotion to Triple-A Lehigh Valley for the final month of the season, Rizzotti missed some time with with the IronPigs due to an injury. 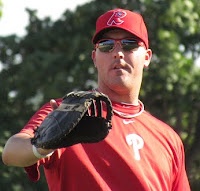 Rizzotti's impressive 2010 continued in the Arizona Fall League, where he batted .333 and had a .500 on-base percentage in 19 games with the Mesa Solar Sox. However, when December came around, "Rizz" found himself subjected to the Rule 5 draft, and went unselected.

Offensively, Rizzotti, who will turn 26-years-old before the 2012 season begins, was strong over the past couple of seasons as well. The Manhattan College alum tallied a .317 batting average with 41 homeruns with 160 RBI over the past two regular seasons.

Often critiqued for his defense, the 6th round draft pick from 2007, Rizzotti, is well aware of his perceived shortcomings and has worked hard to improve in the field and earn a shot at his lifelong dream of reaching the big leagues.

Comparatively, the University of Mississippi product Overbeck outperformed Rizzotti just a shade in the field, posting a .995 fielding percentage in 60 games at first, while Rizzotti had a .988 mark in 96 games.

With plenty of time between now and the outset of the the 2012 season, there's no definitive answer as to "Who's got first?" With free agent Raul Ibanez's spot in left field vacated and general manager Ruben Amaro Jr.'s preference to keep top prospect Domonic Brown down in Triple-A next year, Mayberry could be better suited to spend some time in the outfield, which may open a door for either Overbeck or Rizzotti to land a spot on the big league roster.