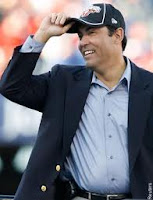 On Monday, Phillies general manager Ruben Amaro Jr. was a guest on WIP's Mike & Ike program and discussed his mindset soon after his club took an early bow from the MLB playoff picture and other subjects.

Asked if he took time off to get away after the Phillies were ousted from the opening round of the playoffs by St. Louis, Amaro Jr. spoke of staying focused on his organization going forward.

"I don't take too long," Amaro Jr. stated. "We've talked with our scouts. We've had a couple of conference calls and meetings- several of them. And we've been doing a couple of different things, but, certainly, lining up for 2012 and beyond has been most of the theme for most of our meetings."

The third-year GM also pointed out that he has already had discussions regarding some off-season swaps.

"We'll be ready to strike if there's a deal to be made, either by signing somebody or trading for somebody...I've already had several discussions with several teams about possible trades," Amaro Jr. added.

Amaro Jr. isn't in the dark and realizes, just as many folks around baseball do, that the Phillies' average player age is rising. That is a particular issue that is of considerable concern to the front office.

"I think that there's things we can do to try to improve and try to get ourselves a little bit younger," Amaro Jr. said, adding that John Mayberry Jr. would be a way for the team to add youth, if he becomes a regular contributor next year.

Also, during the interview, in response to an inquiry regarding if he shares the same feeling that many Phillies have, in relation to being so let down by the Phils' shortcomings this postseason and not having interest in watching the World Series, Amaro Jr. said, "I can't watch it either."

The Phillies top executive clarified the reasoning behind his lack of desire to watch the Texas Rangers and the St. Louis Cardinals battle for the world championship. He added, "Because I still think we're the best team in baseball."