The Market is Still Hot 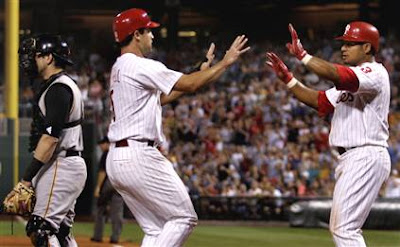 Did you know...that, even with the $423.5 million that the Yankees just promised to CC Sabathia, Mark Teixeira and AJ Burnett, that their 2009 payroll is slated to be lower than it was in 2008? With several big contracts (Bobby Abreu, Jason Giambi, Andy Pettitte, Mike Mussina and Carl Pavano) coming off their books, the Yankees had loads of money to spend.

Speaking of phormer Phillie Bobby Abreu, the latest rumors state that Abreu is being targeted by two California teams...the Oakland Athletics and the Los Angeles Dodgers. Manny Ramirez remains the Dodgers' first choice to play left field, but they can't wait around while other options that appeal to the Dodgers, like Abreu and Adam Dunn, are available. According to the LA Times, Manny's agent Scott Boras has been out of touch with the Dodgers since Mark Teixeira, another Boras client, signed with the Yankees before Christmas. Those hefty commission checks take some time to deposit, I suppose.

Among some mild chatter about the Athletics' interest in Bob Abreu, the LA Daily News also mentions Oakland's interest in Pat Burrell. Apparently the Tampa Bay Rays might be the A's chief competition in signing free agent outfielders Burrell, Garrett Anderson and/or Abreu.

In a roster note, our Phils signed reliever Gary Majewski to a minor league contract on Monday. Majewski was with the Nationals franchise before being traded to the Reds organization in the Felipe Lopez/Austin Kearns deal, in 2006. Majewski is a righty who will turn 29 during spring training, and has a considerably high WHIP of 1.94 over the past two seasons. Majewski has little chance of making the opening day roster.