Charlie smells what the Ballz is cookin'! 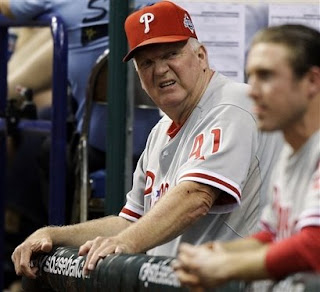 Two days into the winter meetings in Las Vegas NV, and the Phillies' have made no additions.

On day #2, the Phils retained the services of their manager, Charlie Manuel, for an extra season. Charlie's club option for 2010 will be picked up, and Manuel was extended through 2011.

Day 1 of the winter meetings was fairly uneventful in Vegas, at least as far as the team roster and staff goes. There was some fun had here at home though. 2007 NL MVP Jimmy Rollins attended the live World Wrestling Entertainment program Monday Night Raw at the Wachovia Center, where he was seated in the front row. A WWE star nicknamed "MVP", Montel Vontavious Porter, targeted Rollins with a Philadelphia diss-filled rant that saw Porter claim he was a real MVP, unlike the fluke J-Roll. Porter also claimed to be better than Chase Utley and Ryan Howard. It was a classic heel tirade. Insult the home crowd's sports teams to get some extra heat. It makes the fans that much more interested in "the good guy". "MVP" was jokingly pictured here on The Phoul Ballz last month in an post about the end of the Phillies' streak of most valuable player winners.

To view the segment featuring Rollins, check out the following link. Skip to the 0:58 mark. J-Roll is shown at 5:17, and is also seen celebrating the result of the match around the 6:17 mark. WWE star Charlie Haas, a former Seton Hall wrestling stand out, has an on-air gimmick where he mocks other wrestlers. His persona in this edition of Raw is "Most Valuable Charlie". I'm sorry, but Phillies phans know who the real MVC is.

From the Hot Stove rumor mill...There's a 3 or 4 team deal being talked about that might see the Phils giving up lefty "Jay" Happ or righty Kyle Kendrick for infielder/outfielder Mark DeRosa. The Phillies and Yankees are reportedly the two main teams targeting free agent starting pitcher Derek Lowe. GM Ruben Amaro Jr. confirmed that if the Phillies sign Lowe, then Jamie Moyer would no longer be persued by the Phillies. Amaro continues to state that the 5th starter role will be filled from within with guys like Happ, Kendrick, Joe Bisenius, Adam Eaton, and so on, competing for the job.

In rival news...the New York Mess signed some guy named Francisco. He's supposed to be the best closer from that other league. The Mess sure love signing guys who are supposed to be the best free agent(/player) at their respective positions to huge dollar contracts. Carlos Beltran, Johan Santana and now "K-Rod". I'm sure spending $37 million on a guy who plays in roughly 4.8% of your innings will prove to be money well spent.