By Jay Floyd December 11, 2008
The Phillies made the first roster alteration at the winter meetings on Wednesday, by trading minor league catcher Jason Jaramillo to the Pirates for Ronny Paulino. This trade deepens the Phillies at the catching position and could have other effects on the 2009 team. The move could unofficially end Chris Coste's run as a Phillie. It could also make Carlos Ruiz or even Lou Marson trade bait.

Another move that happened on Wednesday that could effect the Phillies down the road is the Yankees signing CC Sabathia. $161 million?! Wow. Now let's look forward to the day when Cole Hamels wants that top free agent pitcher money. Enjoy young Colbert while you can, Phillies phans.

The Rule 5 draft happens today, on the last day of the winter meetings. I always forget the exact criteria for the draft, as there's a year in between that permits the memory to fade. But the basic outline is to prevent teams from hording too many young players in their minor league systems, if there are other teams willing to give the players a shot in the majors. Once selected, a team must add the player to their 40-man roster immediately and the player must stay on the team's 25-man major league roster for the entire follow season, or else be offered back to the original team. Shane Victorino is the Phillies' most notable rule 5 draft selection. 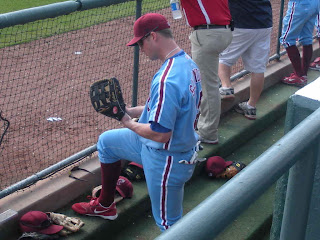 Jeremy Slayden may be a Phillie that other teams will target this time around. Okay, maybe not...I just had a good picture of him messing with Greg Golson's mit that I wanted to post.