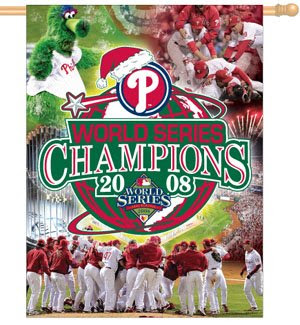 MLB's winter meetings begin this coming Monday. According to new Phillies general manager Rueben Amaro Jr., the Phils' priorities are to add a starting pitcher and to improve the bullpen. Many expected Jamie Moyer to be re-signed by now, but it is likely that the Phillies are only willing to offer a 1-year contract, while Moyer and his agent, Jim Bronner, are wishing for a 2-year dealio. Derek Lowe's name has been in the media this week as a pitcher the Phillies have had talks with.

The gift giving season is also upon us. Phillies Phans young and old alike will have the World Series DVD on the wish lists this month. Allow me to give you a tip on where to find the glorious 8-disc set the cheapest. http://www.deepdiscount.com/viewproduct.htm?productId=54055428
DeepDiscount.com offers the full collector's set for the low price of $48.61, no tax, and shipping included. Amazon.com's item description of the bonus features includes this blurb...Alternate audio tracks featuring World Series announcers: Harry Kalas, Larry Andersen, Scott Fianzke, and Chris Wheeler (Phillies Radio); Joe Buck and Tim McCarver (Fox); Angel Torres, Miguel Morales, and Cos Villa (Fox Sports); Dave Willis and Andy Freed (Rays Radio) Of course, we realize they meant Scott Franzke and we're all very excited to have the option of listening to our local guys call the games. That is probably the best thing about the set.

And with Harry Kalas in mind, I'd like to assert my opinion that Harry Kalas is more of a Phillie than any of the players or coaches that wear that uniform on game days. Harry has been around longer than all of them, and he deserves to go down in history as one of the greatest Phillies of all time.

Have a great holiday season, everyone.