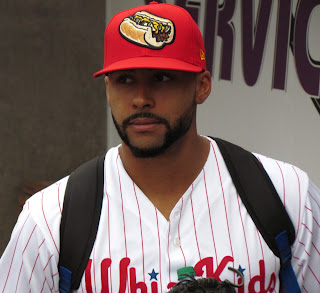 Righty pitcher Jesen Therrien has been pushing his way toward the big leagues and could become a factor out of  the Phillies bullpen soon enough.

The 24-year-old Quebec native sports a 2-1 record with nine saves, a 1.49 ERA and a 10.6 K/9 mark in 33 combined games with Double-A Reading and Triple-A Lehigh Valley this season.

Recently, I spoke with Therrien, a 17th round draft selection from 2011, about his repertoire, growing up as a baseball fan in hockey country, and plenty more.  Read ahead for that full interview.


-You have had a lot of success this year.  Can you share some thoughts on your 2017 season to date?

-What is the full menu of pitches for you and what's the best weapon?

-Do you think there was a big adjustment going from Double-A to Triple-A?  Where there any difficulties?

It's still baseball.  High A, Double-A and Triple-A, you have to pound the strike zone and be aggressive.  And if you have that mentality as a pitcher, everything's going to be fine.

-You're a Canadian guy.  What are your earliest memories of baseball growing up?

Aw, I was like three years old or four years old.  My family has always been big baseball fans, so I started really early.  Even though hockey is the biggest sport up there in Canada, my family would always bring me to baseball games and teach me how to play.

-Did you attend pro games as a young guy?

-Are there any big memories of particular players?

I used to like a lot of players.  Of course, Vladimir Guerrero was the star back then.

-Were there any pitchers that made in impression on you, as somebody you might want to emulate?

I love-- I had a lot of pitchers I really like.  I can't say just one.

-Is there anybody that sticks in your mind as having made impressions on you?

Of course, Eric Gagne. I mean he was always my mentor.  He helped me a lot, so I used to watch him a lot when I was young, yeah.

-Gagne tried a pro comeback this year, pitching with the Atlantic League for a quick few weeks.  It didn't work out, but were you aware of that?

Yeah, after the (World Baseball Classic) he wanted to sign somewhere and play baseball.  He always was and still is a big gamer, so that's why they call him "Game Over".  It was fun to see him come back.

-Did you get to compete along side him on the WBC team?

I was on the team.  I played for the exhibition game, but I didn't compete in the WBC.

-Was that your choice or something that was the organization's call?

I think it was just to give me the experience.  It was helpful to be there with those guys.  It was great.

-I talked with your pitching coach Dave Lundquist about you and he thinks that you're a guy whose name that Phillies fans are going to know about, if they don't already.  Is that in your mind at all, making the right impression or trying to make your name known?

No, not really.  For me, the thing is, just play baseball as simple as it is.  Just throwing strikes, one pitch at a time and just worrying about what I can control.  You know?  I can't control anything outside of the field.  My job is to go out there on the mound and do what I can do best for the team.

-I also talked with Lundy about Pedro Beato being a veteran leader for the younger guys out in the bullpen.  Is he a guy you can learn from.

Yeah.  All the guys here, not just one guy in particular.  But, like it's a lot like the WBC team.  A lot of veterans.  A lot of guys that have played a lot in the big leagues and just to learn from them and be around those guys, it's great to see their routine and to see their approach toward the game too.

-Many of the guys that were on the Reading team last year are now on this Lehigh Valley roster.  You guys fell short in the playoffs last year.  Are you looking ahead to making it back to the playoffs this year?

I mean, we have a great team right now and we have a lot of young guys and veterans, a great mix!  Of course, I think we are a really competitive team, so I think we have a chance.  We have to improve to do it.