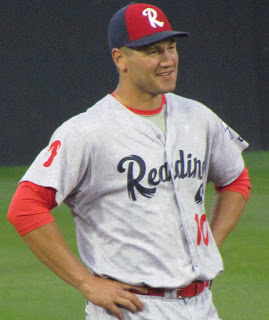 Eastern League home runs leader Mitch Walding will represent the Reading Fightins in the league’s All-Star Game this week in Manchester, NH and will also compete in the event’s Home Run Derby.
With 20 big flies thus far this season, the 24-year-old is enjoying a remarkable power surge. He was honored as Eastern League player of the month in June, when he launched 13 homers and sported a 1.246 OP in 25 games.

Through 74 games, the California native has tallied a .240 average and 49 RBI with Double-A Reading this year.
Walding, the Phillies 5th round draft selection in 2011, notched a previous career high in round-trippers last year, when he smashed 13 combined home runs in 123 games with Class A Advanced Clearwater and Reading last season.

He credits a refined approach at the plate with his improved offensive production.

"I changed my swing a little bit," explained Walding.  "I got back to more of what I was doing last year in Clearwater.  I think I got back to what feels good for me.  I went through a period where I was doing something that wasn't really working for me, so I went back to square one, got back to my basics and I think that was best for me, hitting."

As has become routine around the minor leagues, winners of league Home Run Derbies are awarded championship belts, a la WWE or UFC.

"It would be kind of cool to add another one to the collection, but I have to go out there and do it first,' Walding said.

Aside from the derby, Walding is looking forward to enjoying his time with some Reading teammates in the game.

"It's really great.  I was really excited just to be a part of the All-Star Game and the represent the Phillies and the great organization that they are," Walding said.  "I'm really excited to go out there with a bunch of my buddies and play against some really good talent and have some fun."

Walding will be joined by four teammates on the Eastern Division roster.  Pitchers Drew Anderson and Yacksel Rios as well as outfielders Carlos Tocci and Jiandido Tromp will join Walding.

Tromp, a 23-year-old Aruba native, will also compete in the Home Run Derby.  The righty batter sports a .294 average with 11 homers and 35 RBI in 75 games this year.

Toronto affiliate New Hampshire hosts the All-Star events with the derby slated for Tuesday, July 11 at 6:30 pm with the All-Star Game itself set for the following night at 7:05 pm.