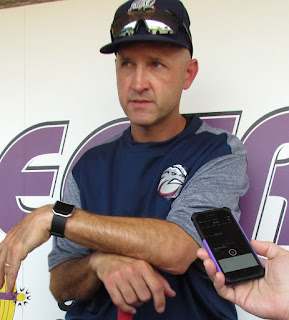 Prior to Thursday's game, Lehigh Valley IronPigs manager Dusty Wathan spoke with members of the media and offered thoughts on some of his club's most talented players.

Among the key topics were International League All-Star and MLB All-Star Futures Game representative Rhys Hoskins, who is batting .300 with 19 home runs and 63 RBI in 82 games, starting pitcher Tom Eshelman, who sports a 6-2 record with two complete games and a 2.15 ERA in 10 starts for the IronPigs, shortstop J.P. Crawford, who is batting .207 in 69 games, and starter Mark Appel, who has posted a 5-4 record with a 4.87 ERA through 16 starts.

Read ahead for Wathan's quotes...

He's the first one at the ballpark every.  He's out there taking ground balls.  He prepares himself as good, if not better than anybody I've ever had.

When asked about Tom Eshelman's performance since a promotion from Double-A Reading, Wathan joked-

I'm a little disappointed he hasn't won more games, but you never know what's going to happen with a guy.  Some guys get an opportunity and run with it.  Some guys get an opportunity and don't have success.  Everybody at some point is going to have some failure and then they hit the wall.  Some guys it takes 20 years in the big league and then they hit the wall, like Bartolo Colon.  But, some guys hit the wall in Double-A.  Some guys hit it in Triple-A.  It's hard to say till they really get there.  For a lot of guys, we can speculate and call them prospects and all that stuff, but until you see them go through it, no one really knows.

On Eshelman's pitching style, having success without great velocity-

He's pitching.  I think it's really fun.  I think over the past 10 years, people have gotten enamored with the radar gun and forgot about pitching.  And you've seen that out of bullpens especially, but I think starting pitchers, now more than ever, we're talking about durability and you know organizations cutting guys out or shutting guys down early or with pitches in certain games.  So, I think there's a lot to be said about a guy that can go out there and give you innings every day and maybe, I'm not saying 100-percent every time on every pitch, because he throws slower than everybody else or other guys.  You know, the guys in the mid-90's are throwing as hard as they can and the guys that are throwing 90 sometimes are throwing as hard as they can.  But, the durability seems better, over the course of time, for guys that are throwing in the low 90's as opposed to the high 90's.  So, I think we're going to see-- my personal opinion is that we're going to see an uptick in guys that can really pitch and throw 200 innings, because I really think that it's important.  You see it in organizations all over the place, that there's not that many guys throwing 200 innings anymore because of injuries and things like that.  I think it's an important thing and I think there's a lot of value in it.

I think he's been mature ever since I first met him, but I think anytime you struggle it can definitely help you in the future.  And I think it's helped him.  I think it's important for these guys to struggle somewhere so they can have the ability to look back on prior things and say, "You know what?  I've been through that before.  I know how to get out of it.  I know I'm going to get out of it."  As opposed to all of a sudden you're in the big leagues and you've never really struggled and you say, "Woah!  Now what do I do?  I've never been through this.  I've got all this media on me.  I'm trying to fight for my life all of a sudden."

He threw a lot of strikes.  He made pitches when he had to.  He was aggressive.  He was able to throw his slider for strikes, his fastball for strikes, he mixed his pitches.  So, I mean he threw the ball where he wanted to a lot.