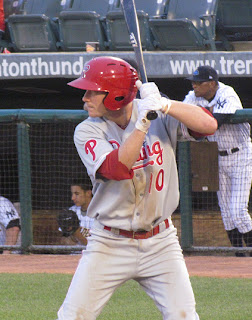 Rosters for the Arizona Fall League's All-Star type showcase were announced on Wednesday with two Phillies prospects among the talents involved.  Third baseman Cody Asche (pictured) and catcher Tommy Joseph will represent their Javelinas club in the seventh annual Rising Stars Game, which will be televised on MLB Network this coming Saturday, November 3rd at 8 PM eastern time.

Asche, the Phillies' 4th round draft selection in 2011, was a fast mover upward in the developmental ranks this year. After beginning his first full pro season with Class A Advanced Clearwater, Asche was promoted to Double-A Reading in June.

Altogether in 130 regular season games at the two levels, Asche, who recently offered his thoughts on his time in the AFL, launched 12 home runs with 72 RBI and an .849 OPS.  In 15 games with Peoria in the AFL, Asche, a University of Nebraska product, has tallied a .259 average with one home run and seven RBI.

Joseph, who was acquired from San Francisco in the Hunter Pence trade this past summer, has struggled a bit in AFL play, batting .172 with no home runs and one RBI in nine games played.

Both of the Phils' representatives are well-regarded prospects and could be knocking on the door to the big leagues rather soon.

Former Phillies prospect Jarred Cosart will represent the Eastern Division as that team's starting pitcher. The right-hander posted a 6-7 combined record with a 3.30 ERA and a 7.22 K/9 mark in 2012 at the Double-A and Triple-A levels of the Houston organization. Through four games as a member of the Mesa Solar Sox in the AFL, Cosart, 22, has a 0-2 record with a 7.36 ERA.  Additionally, former Phillies first base prospect Jonathan Singleton will also represent the Astros organization in the contest. The 21-year-old has posted a .250 average with three homers and seven RBI in 18 games for Mesa.


Also on Wednesday, the Double-A Reading Phillies announced a partnership with Brandoise to rebrand the team for the upcoming 2013 season. From the sound of things, the R-Phils, one of a very small amount of minor league teams owned by its major league parent club, will likely see a full name change as part of the process.

Employees inside the club are mum on details until the next steps in the process are revealed at FirstEnergy Stadium this coming Sunday, November 4th, when the team hosts a Toy Run event at 12:30 PM.

Philadelphia’s Class A Advanced affiliate in Clearwater was also known as the Phillies until it was rebranded as the Threshers prior to the 2004 season.

Reading and Philadelphia have the longest running relationship in minor league baseball, dating back to 1967.


Lastly, I spoke with former Phillies pitching prospect Eric Pettis recently, and he confirmed that he is done with baseball. Citing that he has moved on to bigger and better things, the UC Irvine product, who pitched two season in the Phillies developmental system, was released during spring training in 2012.

Early this past summer, Pettis stated that he was still hopeful of catching on with an affiliated team in the minors and did not wish to sign with an independent league team. As time went on and the openings weren't there, Pettis clearly changed his mind about a return to the game.