By Jay Floyd October 21, 2012
Fans, off-season leagues are in full swing and each week we'll take a tour to review the performances of your Phillies players that are in action all over the world.  Read ahead for the full rundown. 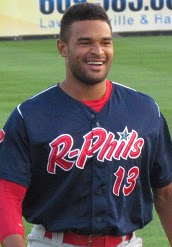 With the Lara Cardenales, outfielder Tyson Gillies, who has steadily concerned both the Phillies organization and its fans with his long list of injury troubles and his off-field issues, is currently sidelined with a right hamstring strain. In four contests, the British Columbia native who turns 24-year-old on Halloween, went 7-for-15 (.467 average) with a double and a triple while driving in two runs. Gillies knows his body well following a stream of hamstring and foot issues in recent years and proclaimed, via Twitter last week, that he would be okay. Right now, the lefty hitting prospect is day-to-day and is expected to return to action by mid-week.

As a member of the Zulia roster, shortstop Freddy Galvis posted a .405 average with two doubles, a triple and three homers and five RBI through nine games to begin the VWL season. A big league rookie in 2012, Galvis was suspended 50 games during the season after testing positive for banned substances.

Infielder Harold Garcia has seen his first organized game action since he was sidelined with a right knee ailment in April. In his first five games, Garcia is 4-for-12 with a double and a triple for Zulia. The switch-hitter, who turns 26-years-old this week, has been playing third base.

Phils rookie Darin Ruf, playing with La Guaira, went 4-for-22 (.182 avg) with a double and two homers while driving in three runs through his first six games. However, Ruf went 2-for-4 with another home run on Saturday, raising his average to .213.  The 26-year-old Creighton product has played both first and left field for the Tiburones.

Also with La Guaira, righty reliever Justin Friend has allowed two earned runs in 1 1/3 innings over three appearances. As the stud closer for Reading this year, the 26-year-old Friend tallied a 0.23 ERA in 38 games. He also posted a 4.40 ERA in 12 games at the Triple-A level.

Second baseman Cesar Hernandez, who was an All-Star with the Double-A Reading Phillies in 2012, went 6-for-24 (.250 avg) with a triple, an RBI and four steals in his first seven contests as a member of the Margarita Bravos.  Hernandez's 0-for-5 effort on Saturday lowered his Venezuela League average to .207. The 22-year-old switch hitter posted a .291/.329/.404 line in 133 combined games at Reading and Triple-A Lehigh Valley this year.

Shortstop Edgar Duran posted a .241 average with a double, a home run and three RBI through eight games as Hernandez’s Bravos teammate. The 21-year-old switch hitter batted .253 with seven homers and 49 RBI in 121 games for Class A Advanced Clearwater in 2012.

In four relief outings for Aragua, righty hurler Manaure Martinez has allowed one earned run in 6 2/3 innings.  The 20-year-old split time with the Gulf Coast League Phillies and short-season Williamsport in 2012, posting a combined 4-5 record in 14 games (13 starts) with a 3.53 ERA and an 8.55 K/9 mark. 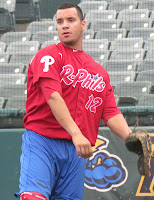 Catcher Sebastian Valle is batting .385 with a double, two homers and six RBI in four games for Los Mochis.  The righty hitting slugger batted .253 with 17 homers and 58 RBI in 105 combined games with the Double-A R-Phils and the Triple-A IronPigs this year.

Outfielder Leandro Castro is 1-for-3 through three games with Oriente.  The right-handed hitting Castro, 23, batted .287 with 10 homers and 71 RBI in 133 games for Reading this year.

Third baseman Cody Asche has posted a .313 average with four doubles, a homer and six RBI in 9 games.  A 4th round draft choice by the Phils last year, Asche batted .324 with 12 home runs and 72 RBI with Class A Advanced Clearwater and Double-A Reading in his first full season as a pro in 2012.

Outfielder Zach Collier, who was the Phillies' supplemental round draft choice in 2008, is sporting a .273 average with a triple and an RBI in 7 games.  Collier began the 2012 regular season serving a suspension, after testing positive for banned substances, but the 22-year-old finished the season with a .269/.333/.399 line for the Class A Advanced Threshers. 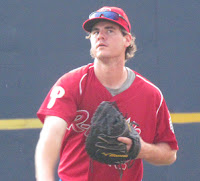 Catcher Tommy Joseph, who was acquired by the Phillies in the Hunter Pence trade this past July, is 2-for-16 (.125 avg) with 1 RBI in five games played.  The 21-year-old Joseph was an All-Star in the Double-A Eastern League this year.

Lefty reliever Jay Johnson, a New Brunswick, Canada native, was charged with four earned runs in 1/3 of an inning in his third outing of the AFL season, so his stats are disappointing.  In four games, the 22-year-old is sporting a 16.87 ERA.

Right-hander Tyler Knigge also had a troubling effort in his third outing, as he surrendered four earned runs in an inning of work.  In four games, the 23-year-old has a 0-1 record, an 11.25 ERA, five strike outs and three walks in four innings.

Righty reliever Colby Shreve has allowed one earned run in 4 2/3 innings (1.93 ERA) while striking out one and walking none.  The 24-year-old posted a 3.69 ERA at three levels of the Phillies organization in 2012.

Kyle Simon, a righty pitcher that was acquired in June's Jim Thome trade, had a shockingly bad AFL debut allowing 7 earned runs in 1/3 of an innings in a starting effort.  Since then, the Arizona product gave up a lone earned run in three innings of work in his next outing.  Overall, Simon's fall league ERA stands at 21.60 in two contests.  Simon tallied a 1.36 ERA in 20 games after joining the Phillies organization in 2012.

Check back here, throughout the coming months, for regular updates on all off-season leagues and exclusive player interviews you won't find anyplace else.

William DeWitt said…
Looks like these guys are having a great time tearing through baseball stadiums elsewhere. Just hope they can maintain the same intensity when they get home for the next season.
February 21, 2013 at 12:21 PM