Philly Fans Should Get Behind Players This Off-Season 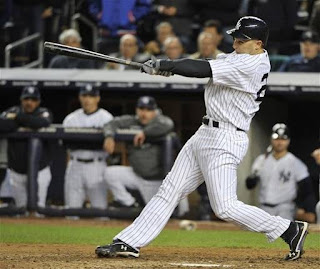 With the Phillies not participating in the MLB post-season for the first time in six years, regional baseball fans are confused about what to do with their time, how much playoff action they can enjoy and who they might root for. Rest assured, fans, it is perfectly okay to cheer for and have been happy when former Phillie Raul Ibanez single-handedly downed the Orioles in game three of the American League Division Series, giving the hated New York Yankees a 2-1 series lead.

On Wednesday night, the 40-year-old outfielder/designated hitter pinch hit for superstar Alex Rodriguez in the 9th inning and launched a solo homerun that tied the game at two runs apiece and sent the contest into extra frames. In the bottom of the 12th inning, Ibanez smacked another blast that gave his team a 3-2 victory.

Philadelphia fan reaction on Twitter was mixed. Some Philly faithful were happy that the veteran, who has never won a World Series, could help his team in such a tremendous fashion. Others cursed and expressed displeasure with the Phillies for letting him walk away as a free agent last off-season.

Phillies hurler Michael Schwimer pointed out, with a tweet on Thursday, that he was rooting for players this year, not teams.  My advice to Phillies fans would be for them to do the same.  Feelings of hatred or jealousy for the team Ibanez plays for should not impact the affinity that fans feel toward the player they grew so fond of when he became an All-Star in Philadelphia.

Former two-time Phillie Jim Thome is another veteran without a championship ring that is battling in the playoffs.  The future Hall of Famer, who ranks 7th all-time in home runs, with 612, began this season with the Phils before a June trade sent him to Baltimore.

Although, if you're a stereotypical Philadelphia sports fan that simply can't bear to cheer on a guy in any other uniform and would prefer to boo something, there are always the likes of Scott Rolen as well as Jayson Werth and his beloved beard still going for their respective clubs, the Reds and the Nationals, to root against.  Each of those guys already have a World Series ring, so do they really need another one?
______________________________________________________