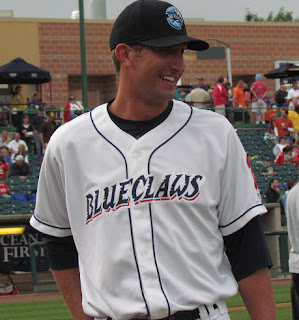 Through six relief appearances in the Arizona Fall League righty hurler Colby Shreve has posted a 1.35 ERA while holding opponents to a .167 average.

The Phillies' 6th round draft selection in 2008, Shreve had Tommy John surgery and missed his first full season following signing a professional contract, as he recovered.

Recently, Colby took some time to offer his thoughts on the AFL and what he's working on while there. Read ahead for that interview.

-How did you find out you'd be competing in the Arizona Fall Lg and what was your reaction?

I found out I was coming to the fall league about 10 days before our regular season ended. I was excited to come to the fall league, just as I was last year. It is a great opportunity to compete against the best competition in the minor leagues and showcase yourself in front of every MLB team.

-Your stats are looking good through six outings for the Javelinas. How satisfied are you with your efforts thus far?

I am very satisfied with my results thus far. Last year I came in and tried to be too fine and perfect, instead of just throwing like I know how. This year I came in with a different mindset and it has helped out tremendously. My walks are down, and I am pitching much better.

-How would you rate the competition there in the Fall League?

The level of competition is just about as close to the big leagues as you can get without actually being there. Over half of the players in the fall league will make it to the big leagues in the next few years, so that tells you something.

-Clearly, you're playing under Dusty Wathan, who managed you during the season with Double-A Reading. How much does it help knowing your manager and what he expects of the team?

It helps knowing your coaches, because it gives you a feeling of familiarity. Dusty keeps it loose and fun, and the response from the team has been great, which is reflected in our success so far.

-Many players from last year's Arizona Fall League made their MLB debuts this year. Clearly that ultimate goal of reaching the bigs must always be in the back of your mind, but does an experience like this make you feel legitimately closer to the big show?

Absolutely, it is a great opportunity to perfect your game against the best competition. If you can pitch here, in an hugely offensive league, you have a good chance to pitch in the big leagues.

-Would you have played in another off-season league, if you weren't pitching in the AFL?

Given that I came here last year, I probably would have taken this off-season to give my arm a rest. But with that being said, I appreciate this opportunity and I am going to make the most of it.

-Are you working on anything different out there and/or is your approach any different than is was during the regular season?

Before I left Florida, I sat down with our pitching coordinator, Gorman Heimueller, and we discussed what I would work on down here. I knew that I needed to cut down on the walks, and as far as pitches, I am working on a sinker to complement my cutter.

-What's on tap for your off-season once the AFL is through?

I look forward to going back home and getting ready for next season.