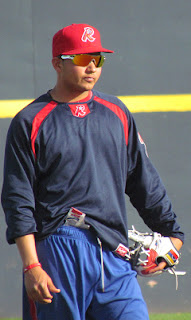 The Venezuelan Winter League got underway on Thursday and Phillies infielder, Freddy Galvis saw organized game action for the first time since June, when he was sidelined with a back injury.  The 22-year-old played shortstop and laced four hits in five at bats, while slugging a homer and driving in two runs en route to helping Zulia lock down a 10-3 victory over Aragua.

As a rookie with the Phillies this year, Galvis, who was signed as an amateur free agent in 2006 at the age of 16, batted .226 with 3 home runs and 24 RBI in 58 games.  Galvis tested positive this year for a banned substance and was suspended for 50 games as a result.  He was able to serve the suspension while on the disabled list and would be eligible for game action at the start of the 2013 regular season.

Other Phillies players participating in the VWL include second baseman Cesar Hernandez, who went 1-for-3 in Margarita's 7-4 win over La Guaira.  Hernandez, 22, had a breakout season in 2012, becoming an All-Star with the Double-A Reading Phillies before earning a promotion to Triple-A Lehigh Valley.  In 133 combined games, Hernandez posted a .291/.323/.404 line.

Hernandez's double play partner with Margarita, Edgar Duran, went 1-for-4 in the contest.  Duran, a 21-year-old switch-hitting shortstop batted .253 with 7 homers and 49 RBI in 121 games with Class A Advanced Clearwater this year.

For La Guaira, Justin Friend, who was Reading's star reliever in 2012, took the loss, surrendering three runs, two of which were earned, in 1/3 of an inning.  Also for La Guaira, Phils rookie Darin Ruf served as designated hitter, going 1-for-4 with a double and a run driven in.

Outfielder Tyson Gillies, batting leadoff for Lara, went 3-for-4 with a triple and an RBI in the club's 6-4 loss to Magallanes.The often injured Gillies posted a .299 average with 4 homers and 24 RBI in 75 games this season in the Phils organization.

Check back throughout the coming months for updates on the off-season leagues as well as exclusive interviews with players as they strive to improve and take strides toward helping the big league Phillies on a permanent basis.