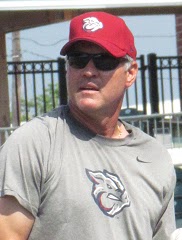 On Wednesday, the Phillies' disappointing year finally ended and the organization took to making some changes in a very quick fashion.  Within hours of the end of the Phils' 81-81 season that marked an end to their run of five consecutive division titles, the team announced that three coaches, Sam Perlozzo (1st base), Greg Gross (hitting) and Pete Mackanin (bench), would not return next season.

Within a day, the Phillies then announced some promotions from within to fill those voids. Hall of Fame player Ryne Sandberg (pictured), who has managed the Triple-A Lehigh Valley IronPigs for the past two seasons, will become the Phillies' third base coach, while Juan Samuel, who previously manned that position, has been asked to move to the first base coach's box.  It seems that Samuel may still be weighing his options.

The Phillies are not expected to have a bench coach while an assistant hitting coach is expected to be hired.

Nichols pitched in the pros for 12 years after being selected as a 5th round draft choice by Cleveland in 1987.  He began his coaching career in 2000, making stops in short-season Peidmont, Class A Lakewood, Double-A Reading as well as the Triple-A level.

Manager Charlie Manuel, who has one year left of his contract, is confirmed to return next year and pitching coach Rich Dubee is set to remain in his position as well. Also, Mick Billmeyer has been moved to catching coach for the Phillies.

Sandberg has steadily been talked about as a successor to Manuel as the team's skipper.  This could simply be the easiest way for the Phillies to try to ensure that happens in the future, as Sandberg would have been a hot commodity to clubs with managerial vacancies over this off-season.  Placing Sandberg in the on deck circle for Manuel's job should keep him in the Phils' organization until what some consider to be an inevitable move happens.

A switch has been long overdue at the Phillies' hitting coach position.  When I interviewed Gross prior to the 2011 season, he was open about his lack of impact on big league hitters when it came to improving their situational hitting.  The veteran stated, "Those types of situations are things that (players) have to want to do.  I mean, it's like bunting or anything else.  They have to want to do it, in order for it to work and we have a club that, for the last five years, that's lived on home runs."  Surely, that type of mindset can be a product of the environment or come from above, but if a coach virtually states that he can't make an impact on a crucial aspect of the game that he's is held responsible for, shouldn't changes be made?

Henderson is well respected and is held in high regard by the prospects that he helps.  The 61-year-old former outfielder is credited with helping fast-rising prospect Cody Asche with excelling at such a speedy pace in his first full pro season this year.  The man affectionately known as "Hendu" spends great amounts of time working with his hitters and would be a perfect participant as the club updates its coaching mentality moving forward.

Nichols is the type of coach that leaves lasting impressions with his players.  Pitchers that move upward or move on from the Phillies organization regularly cite Nichols as a teacher that offered great amounts of assistance with helping them mature as a player and as a person.  Those individuals often stay in touch with the Georgia resident as their career progress as well, which makes it evident that Nichols, father of Phils 2012 draft pick Chris Nichols, is a valuable mentor for those ball players.

Placing Ryne Sandberg in the 3rd base coach's role without appointing a bench coach allows the team to promote Sandberg to a very active on-field position without appointing another second-in-command.  Considering the admission of Manuel at a press conference on Thursday that Sandberg would take over manager duties in his absence, should such a situation arise, confirms that the former Phillies 20th round draft selection is ranked directly behind Manuel in the hierarchy of the coaching staff.

The evident ranking of the coaches and his potential move across the diamond are things that could combine to leave Samuel feeling displeased.  Samuel, a former Phillies player, has previously managed in the big leagues (Baltimore, 2010) and has expressed his interest in returning to such a position in the future.  Placement behind Sandberg might urge the Dominican native, Samuel, to seek employment elsewhere.

Team general manager Ruben Amaro Jr. stated that Sandberg's position does not preclude him from interviewing for vacant MLB managerial positions during the upcoming off-season.

OBC said…
Good start, but roster moves should make the biggest difference in next year's team.