By Jay Floyd July 22, 2013
It's summer and in this scorching July weather, we're focusing solely on the players who've been hot lately in this round of Phillies minor league notes. 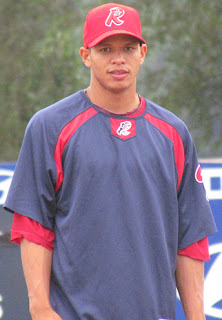 Newly minted center fielder and All-Star second baseman Cesar Hernandez is batting .338 along with four doubles, a triple and seven RBI in 17 July games.  The 23-year-old switch hitter appeared in nine games with the big league Phils earlier this season, going 7-for-28 (.250 avg) during that stint.

Shortstop Freddy Galvis has tallied a .375 average with five doubles, a homer and seven RBI in his last 10 games for the IronPigs.  The 23-year-old sported a .207 average in 54 games with the Phillies earlier this season.

In his past eight games, outfielder Kelly Dugan is batting .344 with two doubles, a home run and three RBI.  The 22-year-old lefty hitter has posted a .305/.380/.500 combined line in 70 games at Class A Advanced Clearwater and Reading this season.  Dugan was the Phils' 2nd round draft selection in 2009.

Since posting a 4.09 ERA in nine May appearances, righty reliever Mike Nesseth has allowed just one earned run in 20 1/3 innings (0.44 ERA) in 17 outings.  The 25-year-old University of Nebraska product is pitching in just his third pro season, after he dealt with elbow surgery in his draft year, 2010.

Former big league infielder Matt Tolbert, who began the season on Lehigh Valley's disabled list, is healthy and batting .447 through 11 games with the Threshers.  The 31-year-old went 6-for-12 in four rehab games with the GCL Phillies earlier this month as well.  Tolbert was signed as a minor league free agent last off-season and should be promoted to Reading or Lehigh Valley any day now.

Outfielder Jiwan James is 9-for-30 (.300 avg) with a double, a triple, two RBI and two steals in his last nine games.  The 24-year-old was activated from the disabled list this month after having knee surgery earlier this year. 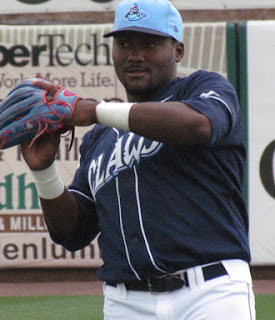 Outfielder Larry Greene Jr. is batting .343 with three doubles and three RBI in his last 10 games.  The 20-year-old was the Phillies' 1st round draft pick in 2011.  Overall, the lefty batting youngster has posted a .240 average with two home runs and 23 RBI in 76 games for the BlueClaws.

Righty starter Nic Hanson has allowed two earned runs in 19 innings (0.95 ERA) over three starts since returning from the disabled list (groin strain) this month.  The 21-year-old was the Phillies' 16th round draft choice last year out of Golden West College.

Outfielder Jiandido Tromp is batting .375 with four doubles, a triple and four RBI in his last 10 games.  The 19-year-old Aruba native is batting .300 overall in 20 games this season.

Through 17 games, 20-year-old outfielder Wilmer Oberto is batting .344 with seven doubles, two triples, four home runs and 26 RBI.  The lefty batting Venezuelan was signed by the Phillies in 2010 at the age of 17.

J.P. Crawford, this year's 1st round draft pick, leads the GCL in batting with a .391 mark.  The 18-year-old shortstop also has three doubles, a triple and four steals in 17 games.