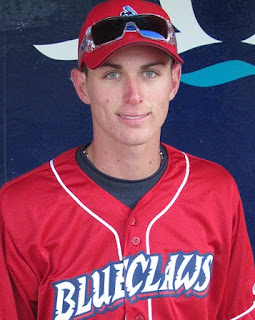 One of the most raved about prospects in the Phillies system is 17-year-old Carlos Tocci. Praised for his superior defense and excellent quickness along with an ability to hit to all fields, the Venezuelan born outfielder opened the season as the youngest player in Lakewood BlueClaws history in the Class A South Atlantic League.

Thus far in 73 games with Lakewood, the 6-foot-2 160-pounder has posted a .231 with 13 doubles, 15 RBI and five steals. Those numbers may not seem too impressive, but Tocci has definitely shown offensive improvements, as he has batted .249 since he posted a .192 mark in April.

With the help of teammate Willie Carmona, who translated for us, I spoke with Carlos this past weekend. The youngster shared thoughts about his progress this year, what attracted him to signing with the Phillies and plenty more. Read ahead for the full interview.


- How has the transition to this level been for you this year? Has it been easier or more difficult than you thought?

One of the hardest things was, at the beginning of the year, it was really, really cold. I had never played in any type of cold, so it was a shock to me. The pitching is a lot better here too. It's not easy like rookie level ball, where pitchers were predictable. Here, it's a lot more difficult.

- Your offensive output has really improved from the beginning of April till now. I know you mentioned the weather, but what else have you worked on to take those strides to improve your game?

At first it was really the cold. It really affected me. But, around May it started to get hotter and I began getting used to the pitching and I started to put better swings on the ball and the hits started to fall.

I feel excited and happy (about it) because I go out there and I work hard every day. It's just great to see results and great to know that people notice. I'm working toward a dream and it's slowly coming alive.


- A lot of guys here with Lakewood credit hitting coach Greg Legg with helping them to improve, working in the cages one-on-one and things like that. How big has Legg been for your game?

Legg helps me mentally, because it's a tough league and he just keeps telling me to keep going, keep going, you're doing everything right, eventually (the hits) will start to fall and they have.


- Are there any of your teammates that have helped you adjust here in the Sally League?

We all help each other, but especially Roman Quinn because his locker was right next to mine. When he was here (prior to being placed on the disabled list), we'd talk about who was pitching, like, "This guy likes his curve ball", "This guy likes his change up," or "I faced him last year, he wasn't throwing as hard as he is now" or something along those lines.


- What players did you look up to growing up?


- Okay, obviously, there's the national thing. He's also from Venezuela. But, aside from that, what do you find most appealing about him?


- Foreign guys, in general, aren't drafted. They have their pick of any team that shows interest. What attracted you most to the Phillies?

I played in front of a lot of teams and I just liked the Phillies. It helped that the Phillies made a good (financial) offer and that they guaranteed that I would travel in my first year playing.


- I have spoken with other Latin players in the past and they've cited Ruben Amaro Jr. as an attraction for them...a general manager that is fluent in Spanish. Was that something that added to the lure of the Phils for you?

Ruben Amaro but also Jorge Velandia, who was the assistant field coordinator, he was there and talked to me about the Phillies and how things are done here and he helped me build confidence in my ability to reach the major leagues.


- If you were asked to scout yourself, what would you say?

I am a good defensive player. I hit with good contact. I just need to get a little more power.


Here's hoping Tocci's power comes along and that he continues to climb the developmental ladder.