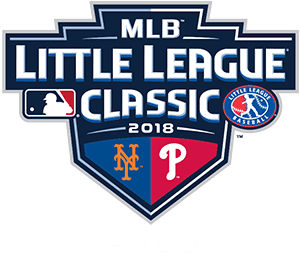 For the second straight year, Williamsport, PA, home of the Little League World Series and the Phillies Class A short-season affiliate, will host a big league contest know as the MLB Little League Classic.

On Sunday night at 7 PM, the Phillies are slated to host the Mets at historic BB&T Ballpark at historic Bowman Field.

Prior to the prime time contest, which will be broadcast nationally on ESPN, the big league players will also attend the Little League World Series games earlier in the day, where they'll have the opportunity to interact with players and fans alike.

The Little League World Series is an international tournament for children aged 10 to 12, held each year in Williamsport.

Professional baseball dates back to 1926 at the Bowman Field venue, while the Crosscutters have been affiliated with the Phils since 2007.

This weekend I heard from the director of media relations for Little League International, Kevin Fountain, who offered the following nuggets of insight related to the event.

-While Major League Baseball handles the planning and operation of the game at Bowman Field, Little League International works directly with Major League Baseball, the New York Mets, and the Philadelphia Phillies to provide an enjoyable experience for all of the Little Leaguers in attendance. From pre-game festivities to in-game activities, the MLB Little League Classic provides tremendous opportunities and lifelong memories for all of the LLBWS participants.


-While there is a core group of officials from Major League Baseball and Little League International who oversaw the initial planning of the event, there are various departments and personnel from MLB, Little League, the New York Mets, the Philadelphia Phillies, and the MLBPA that have contributed to the planning and organization of this historic event.

-The opportunity to bring the MLB Little League Classic to Williamsport has been one of the most historic and memorable moments in the 70-plus-year history of the Little League Baseball World Series. Not only is the event a once-in-a-lifetime experience for all of the participants and volunteers of the LLBWS, it is a great opportunity for the Williamsport community to welcome Major League Baseball into this iconic baseball town.