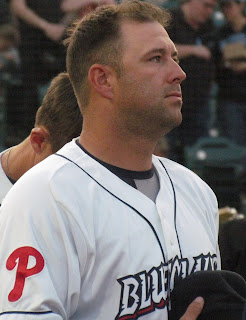 Last week I talked with Lakewood hitting coach Tyler Henson about his club's offense.  Among the key topics discussed were powerful outfielder Jhailyn Ortiz and promising second baseman Daniel Brito, who spent much of the season with the BlueClaws.  Read ahead for some exclusive quotes.

-Talk about how tough the grind of a full season can be for players that haven't gone through it before.


The guys that have never been through it, they don't understand how to-- physically it gets tiring, but the mental part is the biggest part of it at this point and not being too hard on yourself when you when you make outs, 'cause everybody wants to finish the season on a good note.  So, when these guys make outs and they get mad or get frustrated and carry it over to the next at bar, for me right now that's the biggest focus is to calm down and take it one at a time at this point.  So, for the most part, these guys are handling it well, but it's still a learning curve.

-Jhailyn Ortiz strikes me as a guy who plays loose.  Is that the case?

At times.  When he's going good, he's loose.  I mean, for me, he's got more ability than anybody in this league.  Will it ever click?  I don't know.  Hopefully, it does, because he's a Phillie and there's a lot of people in Philly that would love to see it.  He's a good kid and he's learning.  This has been a good learning year for him.  So, hopefully, he can finish on a strong note.

-Daniel Brito got promoted midway through the year after spending a season and a half with Lakewood.  What progress did you see that made it the right time for that move?


I thought he grew every at bat throughout the year.  He went through a little scuffle early on, because he was upset that he was here.  But he kind of grew out of that and then he started to grow as a hitter and learn how to put together good at bats and not worry so much about the results and just having quality at bats.  And when he started really focusing on that, he started to see the average climb, you know, and started to barrel (the ball) consistently.  So, I was happy to see him get going and get out of here.

-The story with the BlueClaws this year has been their pitching, which ranks at the top of team rankings for staff ERA.  On the other side of the game, the offense might be near the bottom in some categories.  Is there a silver lining or a story with this offense this year?

For me, from the beginning, it was all about teaching these guys to be professional.  The I think last time we talked that's mainly what I talked about was just how to have a routine, to teach them to go about their business every day and go about it the right way.  You know, that whole first month, I think we hit .217 as a team, which is hard to do.  But, no one quit.  Everybody kept working, kept working and kept working and those guys in the clubhouse, it's all on them.  They put all the work in and they did everything they needed to do to get where they're at now, and it's just about finishing the work.

-Is there anybody in this lineup that's underrated in your opinion?  Anyone that doesn't get the recognition he deserves?

To me, everybody in there is underrated.  I've been with them all year.  I love every one of them.  So, they all put work in and go about their business.  I can't just single one guy out.