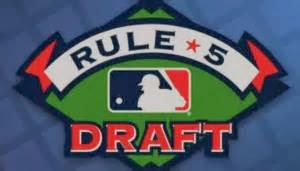 As the annual Winter Meetings begin to wind down the Rule 5 draft took place on Thursday and the Phillies lost a player while gaining another.  Right-hander Kevin Munson was selected by the Phils from Arizona while the Mets took righty hurler Seth Rosin from the Phillies.

With Double-A Mobile in 2013, Munson was a mid-season All-Star, posting a 2-2 record with a 3.41 ERA, 13 saves and a .157 batting average against in 29 relief outings.  Following a promotion to the Triple-A Pacific Coast League, which is often considered tough on pitchers, the six-foot-one 215 pounder sported a 0-2 record along with a 5.09 ERA, one save and a .269 batting average against in 24 relief appearances for the Reno Aces.  Additionally, Munson combined to tally a 10.87 K/9 mark at the two levels last year.

Scouting reports on Munson state that he has a low-90's fastball and a plus slider.  He projects to be a late inning reliever.  Munson was a 4th round draft selection by Arizona in 2010.

In five outings for Hermosillo in the Mexican Winter League, Munson has 1.59 ERA with two strike outs and one walk through 5 2/3 innings.

This is the second straight year the Phillies took a player from Arizona.  Last December, the team selected outfielder Ender Inciarte from the D-Backs, but lost him back to Arizona.  Rules require the selecting team to keep the selected player on their 25-man big league roster for the entire 2014 season, or offer him back to the team he was drafted from.

*Update- Rosin was swiftly traded by the Mets to the Dodgers.  The same Rule 5 requirements of sticking on the major league roster will apply to Rosin with his latest new organization.