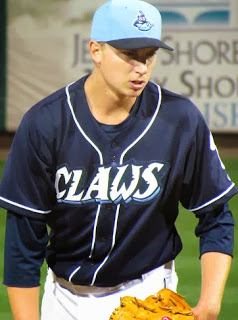 Throughout the off-season, I'll be checking in with various players from around the Phillies organization to see how they're staying in shape and how they're keeping busy during the colder months.

This round I chatted with righty pitching prospect Nic Hanson, who had a solid season in the minors for the Phillies this year.  Last year's 16th round draft selection began the season with Class A Lakewood where he sported a 2-2 record along with a 2.49 ERA and a 7.1 K/9 mark in 16 total outings.  Following a groin issue that sidelined him in May, Hanson returned to the BlueClaws, posting a 1.09 ERA over five starts which earned a promotion to Class A Advanced Clearwater.  In five starts with the Threshers, the California native went 0-2 with a 6.23 ERA.

Following the season, the six-foot-seven 210-pounder made up for some missed time from the regular season by spending time at the fall instructional league.

This week I spoke with Nic about his time at instructs, his off-season routine and plenty more.  Read ahead for that interview.


-Once your season winded down and you begin your off-season, how much time off do you take and how much time passes without picking up a baseball?

I went to the fall instructional league, so I got home in the middle of October.  And I guess I didn't pick up a baseball until about two weeks ago.  So, I think I went two months with my down time.


-Related to your time at instructs, what do you think you took out of your time there that was most beneficial to you?

It was just to work out some mechanical stuff, staying back and getting a little more out of my body and frame and I felt like I got a lot out of it and it was definitely worth it.


-I know that players who go down there would typically get to work with different instructors and coaches than they did during the regular season.  Did you get time with any other coaches and who helped you while you were there?

Well, I got to work with Aaron Fultz again and I've had him the last two years.  It was helpful that he was there, he knows me really well.  And, of course, Steve Schrenk.  I worked with him last year.  And then now, Carlos (Arroyo) was there and he's the new pitching coordinator, so it was cool to try to get a feel of his new ideas and the way he's going to run stuff.


-Did you have any early impressions of Arroyo while you were down there?

He's a very knowledgeable guy.  Pretty laid back.  Likes to smile, likes to laugh and, you know, I like to do the same, so seems like working with him will be good.


-What is your throwing program like, now that you've gotten back to it?  How do you start out and who do you throw to?

I live with two guys from the Red Sox and my buddy Henry Owens is who I play catch with and we threw- a few days, because we live on the beach, we played catch in the sand, with our toes in the sand, which was pretty fun.  We just start off slow and go 60 feet and work it back to 90, gradually, and just let my arm feel- I kind of play catch according to my arm.  You know, I just gotta work it out.  I haven't started to long toss or anything yet.


-I know some minor league players will work or teach in baseball clinics or hold down other jobs during the off-season to supplement their incomes.  Do you have anything like that going on at this stage of the off-season?

I haven't yet.  I will be coaching a team after the first of the year.  Do a little pitching coach kind of stuff with some younger kids, but as far as "work work", I'm not doing any of that right now.  Teaching kids to play baseball I think is fun.  No retail stuff or anything like that.


-So, without work taking up your time, are there any hobbies you're into to keep busy this off-season?

Yeah, whenever the waves are good, I'm always in the water getting waves.  And it's been pretty good the past week, so that's always nice to catch some waves and get in the water.  It's been a little chilly, but it's kind of refreshing.