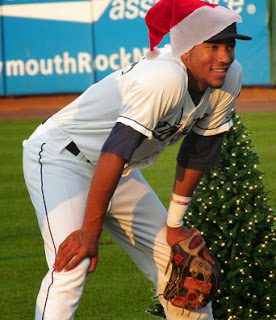 It's that time of year that gets folks in the mood to be merry. The biggest of all holidays is loved by all, for many reasons. Baseball players certainly don't feel any differently. In recent weeks, I have checked in with several Phillies players, from the bottom to the top of the system, to find out what stands out for them as reasons to get excited for Christmas.

Questions and answers detailing each player's holly jolly holiday favorites are ahead...


What is your favorite Christmas movie or TV special?

JP Crawford- Favorite Christmas movie is The Grinch. Just one of my favorite movies.

Shreve- My family has a tradition where we watch Elf every Christmas. It gets us in the holiday spirit, and it’s hilarious.

Mitch Walding- Probably, Home Alone is my favorite Christmas movie. It's a funny movie. You can always get a good laugh out of it.

Nic Hanson- I would probably say Elf, because Will Ferrell is hilarious.

Art Charles- My favorite Christmas movie is Home Alone 2: Lost in New York. Classic movie that has always been my favorite since I was younger. Love how he sets up traps for the burglars and uses what he has around the house as his weapons...and of course they all worked like a charm. Gotta love how the kid outsmarts the burglars and how he is always one step ahead of them. Definitely made me wish I could throw bricks off the top of a roof and set up traps for someone.

Cameron Rupp- Favorite movie would have to be Elf! I still act like Buddy when Santa is coming.


What is your favorite Christmas song?

Crawford- My favorite Christmas song is the Jackson 5 version of Santa Claus is Coming to Town. Me and my family always jam to that song.

Leiter- I would say Bruce Springsteen- Santa Claus is Coming to Town. I definitely like Bruce.

Shreve- I think my favorite Christmas song of all time is the Eagle’s rendition of “Please Come Home for Christmas”, but it’s hard to narrow it down because I love Christmas music, and I start listening to it in November.

Charles- My favorite Christmas song would have to be Feliz Navidad. I like it because it's different and also has a mixture of Spanish and English as well as good vibes. I feel like you can't sing that song and not have fun or enjoy doing it. Great song and has the Christmas feeling.

Rupp- Favorite song would be Santa Claus is coming to town.


What is your favorite Christmas gift from childhood and why does it stand out?

Crawford- Favorite gift I got was my basketball hoop when I was, like, nine. Me and my dad always play and it always is competitive because I hate losing and so does he.

Leiter- My dad has gotten me some great memorabilia. He gave me a Griffey baseball one year. He got me a Griffey jersey one year, because I was a big Griffey fan. I got a decent amount of memorabilia for Christmas and me and him are big on memorabilia, so that was always cool. As far as toys, I remember he used to buy me Starting Lineups every year. So, I would say those, because it was cool to have them and collect different guys.

Shreve- I remember when I was about 12, I got a Ohama Gold baseball bat for Christmas and I think I carried it around for about a week.

Walding- That's tough. I'll have to go with, maybe a bike or something. I'm not sure.

Hanson- That's a good question! Probably a tie between when I got Playstation 2 one year, I remember I was so excited to get that. And then my first shot gun I got. I like to hunt.

Charles- My favorite Christmas gift I received in my childhood was probably my rollerblades. The reason these were such a great gift to me is because a movie came out on Disney called "Brink" and it was about a rollerblader trying to get a sponsorship but also remain a "Soul-Skater" with his friends. It was definitely my favorite movie at the time. All me and my buddies did was skate everywhere trying to do tricks and be apart of "Team Pup 'N Suds" and soul-skate.


What is your favorite food or dish at the holidays and who makes it?

Leiter- I am not sure. I don't think I can give you one, because I like it all.

Walding- I guess my grandma makes waffles and pancakes every Christmas morning, so I have to go with that. It's great to be at my grandparents' house and they always have a nice breakfast.

Hanson- We always make a nice ham. A nice Christmas ham and I love ham. I like it better than turkey.

Charles- To be honest I don't have a favorite food or dish during Christmas because all of the food is so good. I always get the best of both worlds because we get together with the family. Everyone brings something and then we just dig in.

Rupp- My favorite food is all of it. (Laughs) It's all good!


What is your favorite holiday tradition?

Crawford- All my family comes down to my house on Christmas.

Leiter- My family comes down and it's not too big of a family, but we get to see everybody at Christmastime. They come down to my house and we don't have to travel. Everyone comes over and it's a good time.

Shreve- It would have to be watching Christmas movies with my family. Another one we have that I enjoy is doing puzzles as a family every Christmas, it takes us about 2 weeks to do the whole thing, because we just do it as we're passing by, but its a tradition nonetheless.

Walding- I mean honestly, just going to my grandparents' house in the morning. You know, the whole family gathers around the living room and we all just hang out and talk and open up presents and I just really love doing that. It's cool. Even after Christmas with the family, I'll go over to one of my friends' houses and we'll all just hang out. And I just really like the gathering of all the friends and family. That's always the best part about it.

Hanson- Not really any tradition other than on Christmas morning, we sit around the tree and, you know, go through the stockings and open presents and stuff. That's basically the only tradition we have.

Charles- My favorite thing about Christmas is that all of my family comes together on this day. I see that as a blessing because everyone works and we don't always get to see each other or spend time, but on Christmas we all unite for a great time. It's a tradition that we all get together at someone's house to visit, eat, have fun, and just enjoy everyone's company. We also do a big gift exchange game at the end of dinner which is also fun as well.


Do you have a Phillies ornament or ornaments from teams you've played with on your Christmas tree?

Leiter- Yeah. Every team. I have one from college, high school, the summer ball teams I played for and we have a Phillies one now.

Shreve- My mom bought a Phillies ornament the year I got drafted. Its just a standard red ball with the Phillies logo in the middle. She also got my brother a Braves one the year he got drafted, but I always make sure the Phils ornament is above the Braves.

Hanson- That's funny. Yeah, we do have a Phillies ornament. I think the year I got drafted, they told my uncle and stuff and he got a little Phillies red logo ball on there.

Charles- I do have an ornament from a team I played for. I don't have a Phillies or Blue Jays one, but I received one from my club team when I was eleven or twelve and I still have it. We did a team gift exchange and after we finished, our coach gave us all an ornament with our names, number, picture, and team initials on it. It was a cool gift. I actually still have it to this day and hang it on the tree each year.

Rupp- Yes, there is a Phils ornament on the tree.


From PhoulBallz.com, PhilliesNation.com and all the players that took part in this survey, we wish everyone the best this holiday season.