The Phillies have been quiet thus far at the annual MLB Winter Meetings in Orlando FL, but one storyline impacted Philadelphia fans a great deal.  On Monday, Roy Halladay, who helped the Phils lock down two division titles announced his retirement from playing baseball.

Halladay, an eight-time All-Star, signed a one-day contract with Toronto in order to retire as a member of the team that drafted him.  Proving to be a class act that he has always been regarded as, Halladay and his family took out a full-page ad in the Philadelphia Daily News thanking the Phillies organization and their fans for their dedication to him during his time in town. 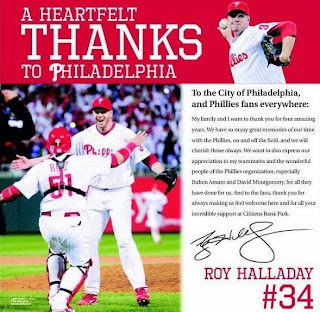 The text of the ad reads as follows...
"To the City of Philadelphia, and Phillies fans everywhere:

My family and I want to thank you for four amazing years. We have so many great memories of our time with the Phillies, on and off the field, and we will cherish those always. We want to also express our appreciation to my teammates and the wonderful people of the Phillies organization, especially Ruben Amaro and David Montgomery, for all they have done for us. And to the fans, thank you for always making us feel welcome here and for all your support at Citizen’s Bank Park."

The retirement caught many by surprise.  Halladay, 36, spoke of his intent to continue to pitch in the majors all through last season.   During a rehab stop in Lakewood less than four months ago, the veteran expressed his desire to continue to chase a World Series ring, stating that if there was a chance to sign with a team that gave him a great change to lock down that achievement in 2014, he might offer to pay that team to play for them.  Halladay cited his lengthy career and previous large paydays as reasons he was not focused on a need to prove himself for his next contract.

Overall in 16 big league seasons, Halladay posted a 203-105 record along with a 3.38 ERA over 416 games.  Additionally, he won two Cy Young Awards, led the league in complete games seven times and pitched the second ever post-season no-hitter against the Reds in 2010.

Halladay came as touted, as one of the big leagues' best hurlers, early in his time with the Phils.  In his first 73 games with the team, including the post-season, "Doc" pitched longer than 6 1/3 innings 59 times (81% of the time).  After some time, however, it was clear that Halladay was no longer an elite pitcher, as injuries spoiled his dominance and durability.  In his final 29 games with the Phils, Halladay pitched more than 6 1/3 innings just eight times (27.5% of the time).

While Halladay will be missed, fans may consider thanking him, not only for his time and effort pitching in Philadelphia, but also for making a decision for team general manager Ruben Amaro Jr.  The Phillies' GM seems to be passing on every possible opportunity to get the roster younger and, although there's been no solid rumors of the like, he could very well have extended a contract offer to Halladay, if the three-time 20-game winner had been receptive.  Amaro has added some mid-30's players this year that will keep blossoming prospects out of next year's lineup.  Be thankful for Doc's years in red pinstripes, but also be thankful that Ethan Martin and Jonathan Pettibone will have an easier route to the 2014 Phillies pitching staff.