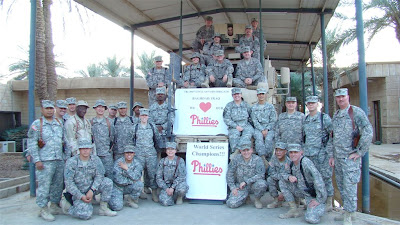 While this week most Phils phans have begun to cool down from their late October/early November PHEVER, local sports phans currently residing on the other side of the globe are keeping things hot. The 304th Civil Affairs Bridage sent home pictures like this, as they continued to celebrate and offer support to the Phillies from phar away.

Mrs. Ballz's cousin Danny, pictured second from left, and his group were treated to 4am start times in Iraq for the World Series telecasts. Replays on the Armed Forces Network enabled viewing at better times also.

Here's to the troops who battle for and defend freedom. We are phans of your's too and as Phillies Phever cools down, perhaps the Troop-berculosis (wow, that's bad) will steadily infect us all. ;)