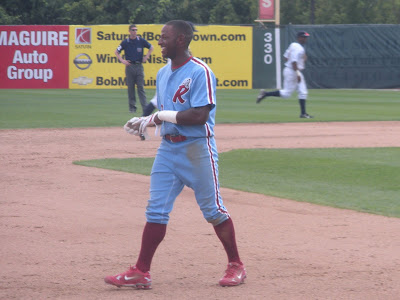 A few big news stories in World Championsville today. The first is that Chase Utley will undergo surgery next week on his injured hip. This surgery could take as long as 6 months to recover from. The right hip had troubled "ChUtley" for a good portion of the 2008 season. If Utley misses the start of the 2009 season, this could be a window of opportunity for Jason Donald, or this could fully seal the deal on a return to Philadelphia for Tadahito Iguchi.

The second story is phormer phirst round drapht pick Greg Golson was traded to Texas for another first round pick John Mayberry. Mayberry, a 24 year old righty slugger, has already been assigned to triple-A Lehigh Valley, and was added to the Phillies' 40 man roster. The loss of Golson should not be a subject to worry about. Last offseason I was stunned to learn that another top draft pick named Mike Costanzo was sent away, and look how that turned out (Eh-hem, BRAD LIDGE). The Phillies were simply at a point where acquiring a young outfielder with power was neccesary and an outfielder with speed and power was expendable.


A third, less significant story that had World Championsville talking today was Pedro Feliz's back surgery. The procedure, a lumbar discectomy, has an estimated 8-12 week rehabilitation period.

The last bit of news to speak of is the rumor that the Phillies have interest in Mariners free agent outfielder Raul Ibanez. Both Pat Gillick, the new advisor to the general manager, and Benny Looper, the new assistant general manager, have history in Seattle and would be rather familiar with Ibanez. The Phillies are in contact with Pat Burrell, but if the sides can not agree on a contract, the Phillies must stay willing to explore other options.