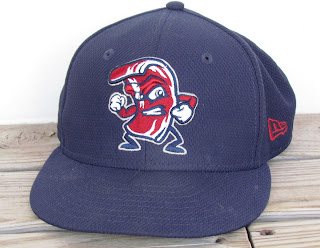 For the third straight season, the Triple-A affiliate of the Phillies, the Lehigh Valley IronPigs, came out on the losing end to the Yankees affiliate, the Scranton/Wilkes-Barre Railriders.

Following a dramatic walk-off win on Friday night in which catcher Nick Rickles got the game-winning hit in the bottom of the 13th inning to force a game 4 in the best-of-five series, the IronPigs were just one out away from pushing the series to the maximum.

Closer Pedro Beato was on the mound facing Railriders center fielder Shane Robinson.  Former Phillies prospect Quintin Berry pinch ran at second base.  With Berry in motion, Robinson stroked Beato's pitch up the middle.  Pigs' shortstop Dean Anna fielded the ball, threw to first base too late to make the out.  An aggressive Berry made the most of the moment, darting toward home and scoring to tie the game at 2 runs apiece.

The IronPigs failed to mount any offense in the bottom of the 9th.

Moving into extra innings for the second straight night, the Pigs turned to reliever Ranfi Casimiro, who allowed the first three runners to reach base.  A run scoring ground out gave the Railriders a 3-2 lead, but they weren't through.  Lefty Tom Windle entered the game to try to limit the damage for Lehigh Valley, but second baseman Bruce Caldwell launched a grand slam to put the visitors ahead by a score of 7-2

In the bottom of the frame, the IronPigs went down in order to lock that score in as a final.

The new free runner on second base rule to open every extra inning that was used throughout the minor leagues during the 2018 regular season was not in use during the postseason.

Left-hander Ranger Suarez got  the start for Lehigh Valley.  The 23-year-old went 5 2/3 innings allowing one earned run on three hits while striking out five and walking two.

The IronPigs offense was paced on Saturday by left fielder Danny Ortiz, who notched three hits including a solo homer.  Second baseman Jesmuel Valentin collected two hits while driving in a run.

This year marked the IronPigs' 11th season as the top minor league affiliate for the Phillies.