By Jay Floyd May 21, 2014
This week I spoke with Lakewood manager Greg Legg and team pitching coach Les Lancaster about a some interesting Class A BlueClaws players. Legg, who is in his 33rd year in the Phillies organization, shared his thoughts about a pair of young positional prospects, catcher Deivi Grullon and third baseman Mitch Walding. Lancaster, who pitched in the majors for seven seasons and is coaching his fourth season in the Phils system, shared thoughts on righty starter Ranfi Casimiro and BlueClaws reliever Ulises Joaquin. 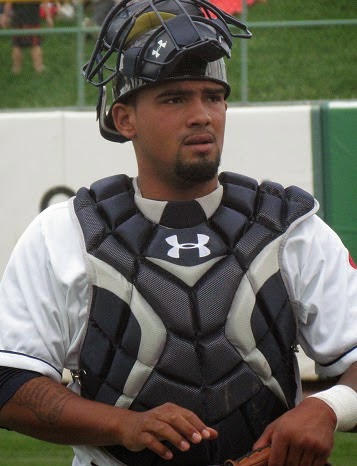 -Legg speaking about Grullon, an 18-year-old backstop who was ranked as PhilliesNation.com's #24 prospect heading into the season...

"He's as young as they get. I don't know if there's anybody younger in the league than him. He's got a lot of energy back there. He's got a strong arm. He's just a young catcher with some tools. And we're hoping, Les and myself and Lino (Connell), that we can get him experience behind the plate on how to call a game and- especially with our young pitchers. And he's getting better at it every time out."

-Legg on the 21-year-old Walding (.247 avg., three doubles, seven RBI in 20 games), who appears in great shape following surgery to remove a rib that had been a chronic problem dating back to last season...

"(He's got) a little more experience. He's a veteran now and he knows what's coming or knows what to expect and he's been carrying himself real well. He's got great presence on the field and he's got quick hands with that bat, when he uses them. He gets us hits."

-Lancaster spoke of the 21-year-old righty Joaquin, who entered action on Tuesday with a 6.13 ERA, but regularly clocks 93-95 MPH with his fastball...

-Lancaster provided thoughts on the 21-year-old Casimiro, who has allowed just two earned runs in twelve total innings over his last two starts, after sporting an 8.39 ERA prior to that...

"Well, definitely, he's come a long way since the first part of the season. We got him to not lift his leg up so high, sometimes, out of the wind up and (out of) the stretch and everything where's he's able to get out front with his fastball and his pitches- a lot better, pitches are down in the zone. He's worked hard to get to that point. The curve ball is coming around slowly and gives him a secondary pitch. And the change up, he has good confidence in it and throws it anytime in the count."