By Jay Floyd September 02, 2013
Thanks to a tweet from IronPigs beat reporter Jeff Schuler, we got our first glance at the Phillies' September call-ups.

Not sure if list is complete but call-ups include Rupp, Robles, Savery, Cloyd, Galvis, Garcia. Aumont no, Valdes no #Phillies #IronPIgs
— jeff schuler (@jschulermc) September 2, 2013

Some familiar faces in pitchers Tyler Cloyd, Joe Savery and Luis Garcia will return after previous stints with the big club this season. Relief pitcher Mauricio Robles and catcher Cameron Rupp will be making their first trips to Citizens Bank Park as official members of the big league roster.

Additionally, the Phillies will recall shortstop Freddy Galvis.  The five-foot-ten 170-pounder posted a .207 average with four homers and 14 RBI in 54 games with the Phillies earlier this season. Of his inclusion on the big league opening day roster, Galvis felt it was encouraging and took a lot of confidence from his time in the majors earlier this year. 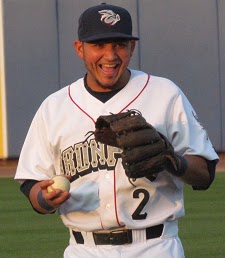 "It feels good," Galvis stated.  "You feel like you worked hard and the work you did in the off-season was good.  I mean, when you have the chance to play in the big leagues, that's the best feeling you have."

Since the demotion to Triple-A Lehigh Valley, the switch-hitting Galvis has posted a .245 batting average with three home runs and 25 RBI and three steals in 62 games.

Although he was extremely pleased to have begun the 2013 season on the major league roster, Galvis stated that there was no level of dissatisfaction with being sent back to the minor leagues.

The Venezuelan born youngster admitted that September call-ups were somewhat on his mind last week as the IronPigs were clinging to slim playoff hopes in the International League.  Following Saturday's loss to Scranton/Wilkes-Barre, the IronPigs were eliminated from postseason contention.

Cloyd started for the Phillies as recently as last weekend and earned a no decision in Lehigh Valley's win over Scranton/Wilkes-Barre on Friday.  In eight big league games this season, the righty has a 2-3 record with a 3.57 ERA and a .270 batting average against.

Robles, who was originally signed as an international free agent by Detroit in 2006, was claimed off waivers by the Phils last December.  The 24-year-old lefty sported a 5-3 record along with a 1.97 ERA and a .167 batting average against in 51 games with Double-A Reading and Triple-A Lehigh Valley this season.

Pitchers Phillippe Aumont and Raul Valdes, who were thought by many to be likely candidates for late season additions to the Phils' roster, will not be added to the team.