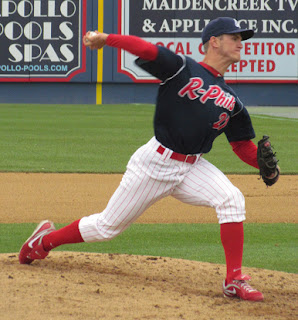 Throughout the off-season, we'll be checking in with various players from around the Phillies organization to see how they're staying in shape and how they're keeping busy during the colder months. To kick things off, righty pitching prospect David Buchanan, the Phils' 7th round draft selection in 2010, took some time to answer questions for the PhilliesNation.

Buchanan was an All-Star with Lakewood in 2011, when he tallied an 11-5 record with a 3.38 ERA in 20 starts before he earned a promotion to Class A Advanced Clearwater. In six starts with the Threshers, Buchanan had a 3-2 record with a 3.90 ERA.

The Georgia native, who is playfully referred to by teammates as "Buck Nasty", spent 2012 with Double-A Reading and posted a 3-5 record with a 3.86 ERA and a 4.98 K/9 mark in 12 starts. Unfortunately, the 6-foot-3 190-pounder had his season cut short, when a recurring ailment in the middle finger on his pitching hand became too bothersome and surgery was required to repair a tendon.

Read ahead to check out what Buchanan said about his recovery, his off-season and plenty more.


-How is the recovery from the finger surgery going? Where are you in the rehab stages and have you been throwing again yet?

Finger is doing very well! I have had seven throwing sessions. I'm at a light 45 feet right now. But, my finger is getting very strong and feels good as new.

I'm doing rehab here in Duluth, Ga. No one from the team is with me. I'm doing the workout the Phillies have provided for me along with other stuff. (I'm also) doing a lot of yoga since I've been able to. Doing the Insanity workout is also a routine of mine to really knock out some cardio.


-Who has provided the most help during the rehab process, whether it's personal or team or both?

The doctors I have been dealing with have been excellent. And many of the coordinators, trainers, and coaches have called numerous times checking on me to see how I was doing and (tell me) how they're excited for me to come back. It feels really nice knowing that the organization cares for their players that much.


-I remember J.C. Ramirez once telling me about Chase Utley talking to him after they each had similar hip surgeries and how that provided J.C. with encouragement. Anything like that for you, since you had the finger fixed?

I haven't had too many encounters with the big leaguers. That doesn't really happen except sometimes during spring training. Me and Domonic Brown are good buddies, so he calls and checks on me to make sure I'm working hard and doing everything I need to do.


-What else have you been doing to stay in shape during the off-season and how different is this off-season for you from the past couple of years?

This one is different because I haven't been able to play golf, 'cause I wasn't allowed to while it was warm. And I'm living in Woodstock because of therapy, so I'm not able to spend time at home with my parents or my dogs which stinks. But myself and the rest of my family understand that this is priority to get well.


-Some guys will hold down jobs over the off-season. Do you work at all and, if so, what do you do?

Yes, I work. I am a back server at a restaurant in Roswell, GA. I am also doing some personal training.


-Lastly, talk a bit about your injury shortened season in which you got hot and posted a 2.18 ERA over your final five starts in 2012 and what you expect of yourself in 2013...

I had started to have a good stretch there, right before I got injured. It really killed me, having to end (my year) like that and not finish the season with my team. I expect to be 100% next season and come back right where I left off...and continue to get better every day.

Anonymous said…
Hοωdy! I could havе sworn I've been to this blog before but after checking through some of the post I realized it's new to me.
Anywaуs, ӏ'm definitely glad I found it and I'll be bookmагking anԁ сhecking
back often!