By Jay Floyd December 30, 2012
It's another edition of our weekly off-season league review. Read ahead, as we take a tour around the globe for a look at Phillies talents including Antonio Bastardo, Raul Valdes and plenty of others, who are participating in various winter league action. 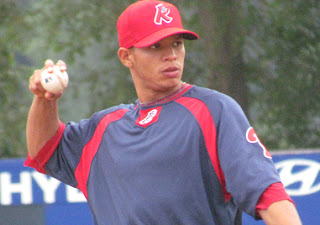 Second baseman Cesar Hernandez (pictured, left) ended his VWL regular season batting .226 with a home run, 16 RBI and 14 steals in 44 games for Margarita, as his team did not advance to the semi-final round.  The 22-year-old switch-hitter batted a combined .291 with two homers and 57 RBI in 133 games for Double-A Reading and Triple-A Lehigh Valley during the 2012 regular season.

Shortstop Freddy Galvis wrapped up his regular season with a 10-game hitting streak, during which he posted .349 batting average with three doubles and seven RBI.  Galvis batted .300 in 58 games for Zulia and has missed the early games of the semi-final round robin for undisclosed reasons, but has stated on his Twitter account that he expects to return to the team in January.

Catcher Humberto Quintero has posted a .333 average along with five doubles, a homer and 10 RBI in 26 games for Zulia.  The 33-year-old was signed by the Phillies last month after playing in 43 games with the Royals in 2012.

Outfielder Ender Inciarte is sporting a .250 batting average along with five doubles, a triple and eight RBI and 20 steals in 48 games for Zulia.  The 22-year-old batted .307 with 46 stolen bases combined at Class A and Class A Advanced in the Arizona system in 2012.

Left-handed hurler Cesar Jimenez has a 0-3 record along with three saves and a 3.86 ERA for Lara. The 28-year-old, who was signed to a minor league deal earlier this month, has struck out 26 batters and walked seven in 21 innings pitched.

Antonio Bastardo had no decisions and a 7.71 ERA through four regular season outings with Cibaenas.  Bastardo has thrown one scoreless frame thus far in the post-season round robin, which began this past week.  The 27-year-old posted a 2-5 record with one save and a 4.33 ERA in 65 big league appearances with the Phillies in 2012.

Utility man Michael Martinez batted .205 in 23 regular season games for Oriente.  Thus far in the Dominican post-season round robin, Martinez is 2-for-6 with a stolen base.

Also with Oriente, outfield prospect Leandro Castro batted .313 with a double and four RBI in 32 games.  Castro is 1-for-2 with a double in the round robin thus far.  The 23-year-old was an All-Star in the Double-A Eastern League in 2012.

Raul Valdes had a strong outing in the round robin opener on Thursday, as he led Este to a win with seven scoreless innings while striking out seven, walking just one and allowing two hits.  The left-handed Valdes posted a 2.90 ERA in 27 games with the Phillies in 2012. 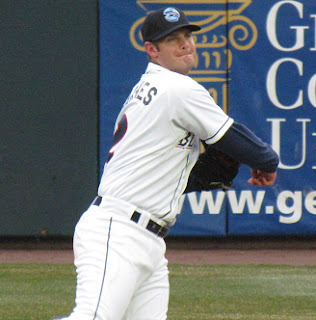 Infielder Jeremy Barnes (pictured, right), who played with Clearwater, Reading and Lehigh Valley in 2012, is sporting a .340 batting average through 27 games with Canberra, which is tied for third best in the league.  Barnes, a Notre Dame product, was the Phils' 11th round draft pick in 2009.


Infielder Carlos Alonso is batting .222 with a homer and six RBI through 28 games for Brisbane.  The 24-year-old University of Delaware product, was the Phillies’ 32nd round draft choice in 2010.

Catcher Liam Bedford, 19, is batting .213 with two doubles and two RBI in 18 games for Melbourne.  Bedford and Warner are native Australians.

Through 30 games, catcher Sebastian Valle has tallied a .193 average with two homers and nine RBI for Los Mochis.  Valle, 22, was an All-Star in the Double-A Eastern League in 2012 prior to earning a promotion to Triple-A Lehigh Valley. Valle is on the Phils’ 40-man roster.

Righty hurler Julio Rodriguez picked up two wins over the past week, pushing his record to 3-1 with a 3.67 ERA in 10 appearances (three starts).  Rodriguez, 22, has struck out 30 and walked 12 in 27 innings for Carolina.