Off-season Check In: Cloyd Up For Challenges Ahead 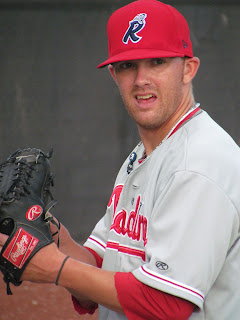 Throughout the off-season, I have checked in with various players from around the Phillies organization to gauge their thoughts on fall/winter leagues they've played in and what their outlooks are going forward.  Recently, I heard from right-handed pitcher Tyler Cloyd, who won the 2012 Paul Owens Award, an honor bestowed upon the most outstanding pitching and offensive players in the Phillies minor league system each year.

This year combined with Double-A Reading and Triple-A Lehigh Valley, the Nebraska native posted a 15-1 record with a 2.26 ERA and a .214 batting average against.  Cloyd, the 18th round draft choice from 2008, was promoted to the Phillies late in the season, and sported a 2-2 record along with a 4.91 ERA in six starts in the big leagues.

Tyler was nice enough to offer his thoughts on his off-season routine, his potential to claim a spot in the starting rotation next year and plenty more.  Read ahead for that full interview.


- What exactly is your off-season workout routine like?  Is there anything different this year compared to other years?

I would say that this off-season has been a lot different this year, as far as working out, than years past. When this season was coming to an end, I really sat down with the strength and conditioning coach and we talked about a good off-season plan for me. I’ve really been pushing myself and even got together with one of my buddies, who is now a personal trainer, to really help me stay on track and get to the point where I want to be at going into spring training.


- How much time off from throwing do you take?  And when will you begin a throwing program to get ready for spring training?

Normally, my time off from throwing really depends on how I felt at the end of the year, and how I’m feeling during the off-season. Normally I give myself about 2 ½ - 3 weeks off of throwing, and then slowly start tossing again. So, for this upcoming spring training, I started throwing in the middle of November and I’m slowly working my way back, getting into bullpens sometime in January.


- I imagine you'd be reporting to spring training a bit earlier in 2013 than you have in the past.  When do you expect to head to Clearwater and what are your hopes and goals for spring training?

My wife and I will be heading down to Clearwater around the end of January. Since we got married in 2010, we try and head down about two weeks early. We do this so I can start working out at the facilities there with the trainers, get acclimated to the Florida climate, and also use it as kind of a vacation for the both of us before baseball starts.


- When trade rumors pop up and your name is attached, how do you react? Is that something you'd rather not hear, or is it encouraging because it means another team might be recognizing your great efforts?

It’s really not anything I pay attention to. When it comes to trades, there is nothing I can do about it, and you never know if it's true or not. So, I just really keep going on with my days, workouts, and preparation for spring training to compete for a spot on the opening day roster.


- With the trade of Vance Worley, it seems that you get a bit of a bump upward on the starting pitcher depth chart in the Phils organization.  Is that something that crosses your mind?  And even if that hasn't crossed your mind, right now, you might be considered a member of the Phillies 2013 starting rotation, so what are your thoughts on that?

I don’t look at it that way at all. With Vance being traded, to me, it does open a spot, but that never guarantees anyone anything. Yeah, I was up there to end the season, but there is a lot that I need to work on and get better at. There are going to be a lot of guys in spring training competing for spots and I will be one of them. I’m not taking anything for granted, nor will I ever.


- A lot of guys hold down jobs over the off-season.  Have you ever worked during the fall/winter months, and, if so, what did you do?

I used to work for our school system here on the grounds crew during the off-season. It was a job that I used to have in the summers during high school and college, and they were nice enough to take me back during the off seasons. We basically just took care of snow removal, along with lots of other things, during the days. I also worked with UPS last year as a seasonal helper, delivering packages. However, I didn’t work this off-season, because I really wanted to focus on getting stronger and in better shape for the 2013 season.