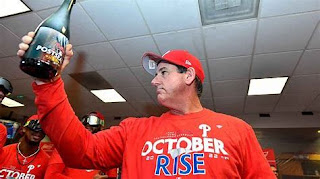 October 7th, 2011. 11 years ago. That was the last time the Phillies played a postseason game.
Here's what else was happening at that time...
The number one song in the United States was Moves Like Jaggar, by Maroon 5 featuring Christina Aguilera.
The Philadelphia Eagles had a 1-3 record and their starting quarterback was Michael Vick.
The funeral of Steve Jobs, co-founder of Apple Inc., took place on that date.
Mookie Betts, a 5th round draft pick of the Red Sox earlier that year, turned 18 years old.  He had played in just one professional game at that point.
Real Steel, starring Hugh Jackman, was the top film at the U.S. box office that week as well as the week that followed.
For video gamers, the PlayStation 3 and XBox 360 consoles were all the rage.
TV Guide's issue at this time featured a cover story about Ted Danson joining the cast of CSI.
Current Phillies ace hurler and game 1 starter Zack Wheeler was 620 days away from making his Major League debut and had not pitched above Class A in the minors.