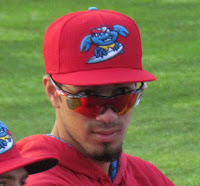 Producing like an All-Star for the Class A Advanced Jersey Shore BlueClaws, right-hander Dominic Pipkin is enjoying a lot of success on the mound this year.

Recently, I spoke with Pipkin, who was fresh off of back-to-back scoreless starts at the time.  He shared some insight on his production to date this year, updating his pitch repertoire, the organization's piggyback rotation with pitchers and more.  Read ahead for that interview.

-What are you thoughts on your season so far?  Are you producing at a level you would have hoped for?

I’ve had a tremendous year so far, I’m hoping I can keep playing as well as I am.

-Much of the Phils' minor league system works with a "piggyback" rotation for the starting pitchers, where one turn a pitcher would start, the next turn the same pitcher relieves the guy who relieved him the last time, taking turns doing that.

The piggyback system is useful because it teaches starters how to get hot quick during a game but it’s not the best because it’s still a five day rotation, not exactly the same as throwing, possibly, three times in a week (as a true reliever).

-Is the piggyback method beneficial for everyone or are there guys that it doesn't agree with?

The piggyback doesn’t agree with some starters, I don’t want to say who, but some of us take longer to get ready than others.

-Are you still working with the same repertoire you had prior to the cancelled season and is there any change to your velocity?

Since the 2019 season I’ve gone back to the same delivery and pitches I used in high school actually.  It’s more comfortable for me and I have an extra pitch to throw batters off my main three.

The remainder of this interview is available to subscribers on Patreon.com/PhoulBallz.  Please consider supporting my work to gain access to loads of exclusive interviews and other content.