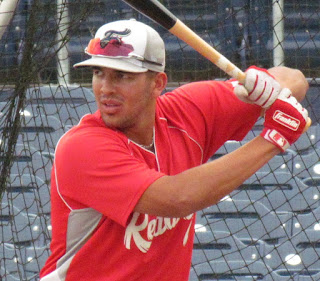 I invite you to visit Patreon.com/PhoulBallz in order to support my work and get access to material like this before anyone else and get access to interviews as well as other exclusive content you can't get anywhere else.

Building on a breakout initial full season that saw him honored as the Class A South Atlantic League's Most Valuable Player, first baseman Darick Hall continued to prove himself worthy of regard as one of the Phillies' most promising minor league power hitters.

A 14th round draft selection in 2016, the Dallas Baptist product made his professional debut with the short-season Class A Williamsport Crosscutters that same year. In 57 games, Hall would notch a .282 batting average with nine home runs and 29 RBI.  His .890 OPS led the New York-Penn League.

He would close out his 2017 campaign with a week in the Class A Advanced Florida State League playing for Clearwater. In seven games with the Threshers, the six-foot-four 236-pounder posted a .231 batting average with a pair of homers and five RBI.

The clean-up hitter's presence in the lineup for a Lakewood club that had several teenagers that were learning what minor league life was like, playing everyday, traveling up and down the east coast, was crucial. Hall, who played three seasons of college ball helped his teammates learn what the professional athlete life is all about. Hall is an individual that can lead by example and he did just that all year long.

Promoted to Double-A Reading on June 1st, Hall would see his batting average dip in the Eastern League, but the power numbers did not fall off. In 80 games for the Fightins, Hall tallied a .224 average with 10 doubles, a triple, 15 homers and 52 RBI.

During the off-season, Hall competed in the prestigious Arizona Fall League. There with the Scorpions he batted .234 while launching four round-trippers and driving in 12 runs through 18 games.

Hall shared with me that he picked up a timing tip from Mets star Pete Alonso that he hoped would help him going forward.

He returned to the Double-A level in 2019 and saw improvement with his production.  In 132 games for Reading, he posted a .235 average with a league leading 38 doubles, a triple, 20 home runs (2nd in the league) and 67 RBI.  Additionally, along with helping Reading reach the postseason, a highlight of 2019 for Hall was taking two-time All-Star Luis Severino deep for a homer in the Eastern League playoffs while the right-hander was rehabbing with the Yankees' affiliate Trenton.  Another big moment for Hall that year was winning the Eastern League Home Run Derby at the All-Star break in Richmond, VA.

Last year, Hall missed the entire regular season, due to the COVID-19 shutdown of minor league baseball.  He was also not included in the Phillies Taxi Squad, but was told to remain ready all summer long, in case he was needed.  So, essentially, Hall was a Taxi Squad alternate.

Hall spent time this off-season playing in Mexico with Los Mochis, lacing four homers in 20 games and gaining experience in left field and right field, while there.

Aside from his missile-like long balls, the 25-year-old's daily work and preparation are the things that impress Phillies developmental coaches the most.

From a family where two of his uncles (Ladd Hall and Shane Hall) were drafted by big league teams, Hall feels structure is important to his game. Everything from diet and practice to making a game plan and following through have been critical to his success.

Hall preaches "confidence is key" and knows which parts of his game he needs to improve. While recording triple digits in strike outs in three straight seasons, the promising slugger has worked plenty on refining his approach at the plate.

He saw a considerable increase in his walk rate heading into his most recent full season, as his 11.2% mark was a big jump from his 6.1% effort in 2018 and his 7.5% career mark heading into the 2019 campaign.

On defense, Hall is solid and dependable.  He is an accurate thrower with a .992 career fielding percentage.

Not a speedster, the Arizona native has collected just seven stolen bases in his minor league career.

The Phillies invited Hall to big league spring training last year, so it's possible for that to happen again this year, if pandemic restriction allow it.  Expect him to see action at the Triple-A level to open the regular season this year.

You can keep tabs on this year's Phillies prospects countdown by clicking on this link.