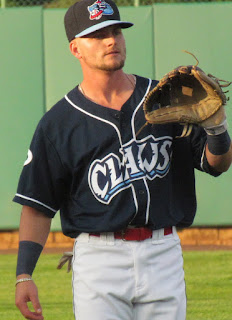 Righty batting infielder Hunter Stovall joined the Phillies organization earlier this season in a trade with the Rockies for lefty hurler James Pazos.  Following the deal, Stovall, who was a 21st round draft pick last year, joined the Class A Lakewood BlueClaws.

In 61 games for the 'Claws, the 22-year-old Mississippi State product has tallied a .216 average with eight doubles, three triples and 19 RBI.

Last week I talked with Hunter about the trade, not being an everyday player at times, his faith and tons more.  Read ahead for that interview.

-You start out the year elsewhere.  What can you tell me about your season and the trade to come over to the Phillies?

The trade was a surprise, of course. I mean I hadn’t even been in pro ball a year and I’m already getting traded, so it was kind of a shock. But, it is what it is, but the season this year, I haven’t got to get in there as much as I’d like, but I guess it’s just the way the Phillies work. It is what it is, but it’s been an okay season.

-You almost seem like you’re holding back. Is that hard for you to come here and get less playing time and you got more at bats elsewhere?

Yeah, I mean it is hard. It’s a grind every day. Like you said, with the Rockies I played every single day. Somewhere every single day. So, to come here and sit as much as I do, it’s hard to deal with, but it is what it is. (When) you get the opportunity, you try to make the best of it.

-Another guy that goes through that with you is Cole Stobbe. And he’s an early round pick, a name that fans would know because of where he was drafted or because of signing bonus money or whatever. Does that make it easier to swallow when you’ve got guys to go through it with? Or is there a bit of a club of guys as you’re all going through it together?

-Let’s get away from that. I tweeted out a picture of you signing autographs for kids and I get hundreds of likes. That’s not normal.  If I get 10 likes, that’s usually good for a photo of a player. There’s countless people affiliated with you, your school, your teams engaging the post. It’s crazy. That support, is it really cool for you?

Yeah, it’s awesome. Coming from Mississippi State and coming from Pelham, the place I grew up, I’ve always had that support.  I've always had fans that-- because I'm a nice guy.  I'm always approached.  I've got kids messing with me on Instagram and stuff and I always take the time to reply to them and do stuff like that.  Just 'cause that's what it all about.  I'm here to be an ambassador of God, of course, but to be a role model to these kids and I don't want to be that guy that's just kind of too cool for school.  You know what I'm saying?  So, yeah, I love the support.  I love the interaction with the kids and the fans.  I love it.

-You mentioned being an ambassador of God.  Does your faith play a big role in your life and does it translate on the field?

Yeah, of course, it translates on the field.  There's a story that I've had to tell everybody, but when I was born, I was actually born dead.  I was dead for two or three minutes or something like that.  And I mean, if it wasn't for Him I wouldn't be here.  I wouldn't be able to do this.  I wouldn't be able to interact with the people that I do, so I mean, it's a huge role.  God blesses us every day.  He blesses me (with) being here, being able to put a uniform on and the ability that He gave me is unbelievable.  So, I mean, everything that happens and everything I do is for Him.  And hopefully, His light is shining through me to other people.  Ultimately, that's what we're placed on Earth to do.  We're placed on the Earth to be disciples of Him and to go along and persuade people or help people understand that He is the true God.

-I wonder sometimes, because I'm not very into religion, that for someone like you that is, for lack of a better way to say it, is a super believer, would you look at someone like myself that isn't very into it in a particular way?

No, not at all.  If you every wanted to sit down and talk about it, I'd be happy to.  But, yeah, of course you can't-- thou shall not judge.  It's in the Bible.  You can't judge people by what they believe and what they don't believe.  So, it's part of who I am.  It'll always be part of who I am and it is what it is.

-Very cool.  You talk about producing when you can and making the most of opportunities.  What sorts of feedback do you get from the coaches and what to work on or improve?

I don't know.  You just gotta be ready when you're names called.  And then you come in here every day and you don't know if your name's going to be in the lineup and it rattles me 'cause I'm so passionate about this game and I want be out there and I want to win.  That's what I'm here for.  And it's hard to come in here some days and swallow that's I'm not in the lineup.  I've got to sit again.  I've got to go in there and catch 'pens and all this stuff.  But, I mean, at the end of the day, you've got to get in the game.  You've got to do your best to try to produce and try to help the team win.

-When the trade came, you mentioned it caught you by surprise.  Do you call family right away?  Do you have to convert them from Rockies to Phillies fans?

Yeah, of course.  Dad's my biggest fan.  He's always been my biggest fan my whole life.  I mean, when I got drafted he went and bought all this Rockies stuff, so of course he was the first one I called when it all happened.  It was kind like emotional at the time, because I didn't know what to expect.  But, yeah, my dad's got all his Phillies stuff now and he's on board.


For the rest of this interview, become a patron over on Patreon.com/PhoulBallz.