Threshers' Scheiner traded to M's for OF Bruce

By Jay Floyd June 02, 2019
Following hours of speculation about what the Phillies would be sending to Seattle in a reported impending trade, news broke on Sunday that the team would send righty batting prospect Jake Scheiner in exchange for Jay Bruce.

Scheiner, a versatile fielder, had played left field, center field, third base and first base this year for the Class A Advanced Clearwater Threshers.  In 45 games in the Florida State League, the 23-year-old sported a .256 average with a pair of home runs and 20 RBI.

The Phillies will use Bruce to fill the void left by Odubel Herrera, who was placed on administrative leave last week following an arrest for a domestic violence related accusation.

According to Phillies.com's Todd Zolecki, the Phillies are to be responsible for just $2.75 million of Bruce's remaining salary.

Best wishes to Jake, who was a key member of the Class A Lakewood playoff team in 2018, in his professional career.

Below is one of my favorite images that I snapped last year.  It's a photograph of Scheiner sharing eye black with a young fan prior to a late season game.  Or maybe it's of him signing the coolest autograph you will ever see. 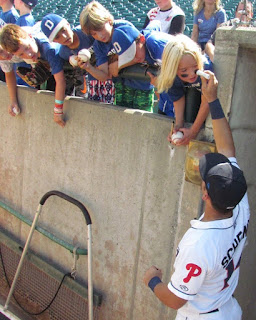