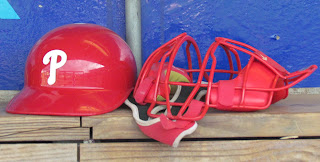 Here is a quick rundown of the Phillies' activity on day two of this year's MLB draft...

With the 91st overall pick in the draft, the Phillies selected shortstop Jamari Baylor.  The righty hitting high school senior out of Benedictine School in Virginia he is scouted as a five-tool player.

In his scholastic season this year, Baylor sported a .412 batting average with seven home runs and 21 RBI, per Richmond.com.

Reportedly, Baylor worked out for the Phillies and the Nationals last week.  The 18-year-old looks to have a strong build and is listed at five-feet-11, 190 pounds.  He is a Louisburg College commit, but has expressed interest in playing professionally.

In the 4th round, the Phillies chose Erik Miller, a lefty pitcher, with the 120th pick in the draft.  Miller, a junior at Stanford, tallied an 8-2 record with a 3.15 ERA and 10.9 K/9 mark in 15 starts.
Miller is listed at six-foot-five, 240 pounds.  The 21-year-old was previously ranked as a 2nd or 3rd round pick by at least three national outlets.  His efforts in the Cape Cod League last summer (7.71 ERA, 1.99 WHIP) could certainly be a reason that he fell to a later spot.

In the 5th round, the Phillies selected Gunner Mayer, a righty pitcher out of a junior college in California.

The Phils took two more right-handed pitchers in rounds six and seven.  Tennessee junior Andrew Schultz, who sports an upper 90's fastball that has touched 101 MPH throughout this season, and Minnesota junior Brett Schulze, who has mid-90's velocity, were those selections.

In round eight, the Phillies took George Washington University shortstop Nate Fassnacht.  The righty hitting 21-year-old posted a .372 average with a 1.108 OPS in 54 games during the college season.
Rudy Rott, a left-handed hitting first baseman from Ohio University was the Phillies' selection in the 9th round.  The 22-year-old senior tallied a .382 average with 10 homers and 47 RBI in 54 games during the college season this year.  His grandfather of the same name pitched professionally.

In the 10th round, the Phillies picked McCarthy Tatum, a righty hitting third baseman out of Fresno State.  Tatum sported a .356 average with 13 home runs and 77 RBI in 57 games this year for the Bulldogs.
Rounds 11 through 40 will take place on Wednesday beginning at noon Eastern.
Current Phillies drafted after the 10th round include Yacksel Rios, who was the Phils' 12th round pick in 2011, Jerad Eickhoff, a 15th rounder of the Rangers from 2011, Austin Davis, the Phillies' 12th round pick in 2014 and J.D. Hammer, who was a 26th round pick of the Rockies in 2016.